From GAMEO
Revision as of 11:03, 16 April 2021 by SamSteiner (talk | contribs) (→‎Bibliography)
(diff) ← Older revision | Latest revision (diff) | Newer revision → (diff)
Jump to navigation Jump to search
A checked version of this page, approved on 16 April 2021, was based on this revision. 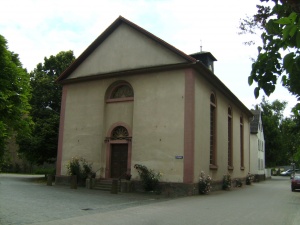 Ibersheim (Yberscheim, Uebersheim), was a village in Rheinhessen, (Germany), near the Rhine, about eight miles north of Worms, formerly called Ibersheimer Hof. On a map of 1752 it is designated as "Wiedertaufhof." (In 2005 Ibersheim was part of the city of Worms.)

The time of the coming of the first Anabaptists cannot be ascertained; they stemmed from the region of Bern, Switzerland, and probably came after the Thirty Years' War, likely in the 1650s. The land had been devastated and depopulated by the war. The great electoral estates in and around Ibersheim had been abandoned. The immigrant Mennonites were welcomed as capable farmers to reclaim this land. It was to the advantage of the Ibersheim Mennonites that they received 12-year leases of the crown estates from the elector, giving them a different status from the other Mennonite congregations.

The Ibersheim estate, which was leased as a whole to the Mennonites, was divided among them into 6 parts, later into 12, and finally into 24 still recognizable parts. To it the neighboring villages, Hamm, Eich, Gimbsheim, Alsheim, Osthofen, and Westhofen, owed feudal service. The Mennonites did not exact this service, and the French abolished it during their occupation of the region (1793-1816). In 1816 Ibersheim passed into Hessian control, and in 1822 it became an independent village. Its first mayor was Johannes Forrer (1822-1837).

Ibersheim was probably the oldest of the Mennonite churches established after the Thirty Years' War in the Palatinate west of the Rhine. In 1661—three years before the first general Mennonite "Concession"—the inhabitants of Ibersheim had been accepted as subjects of the Palatinate. Upon this Concession all subsequent decisions and measures by the government concerning the Mennonites were based. It states: "That they may for the sake of their faith, for which they are not to be molested, hold no public or private meetings or conventicles attended by others that do not live on the estate, much less attract and mislead others of our subjects." The church chronicle of 1683 makes the first mention of a rental contract.

The charge was soon made that they abused the elector's grace. In May 1671 Inspector and Dean Johannes Jakob Löffler of Osthofen accused them of having baptized a member of the Reformed Church. Investigation revealed that a Jakob Weber, whose grandparents had, however, been Mennonites, had indeed been baptized. The congregation at Ibersheim was fined 100 Talers. They were now secretly but closely watched to note any transgressions against the Concession of 1664. It was observed that 50-100 Mennonites attended their services, whereas the Concession allowed only 20 to meet together. Upon a petition signed by all the Mennonites in the Oberamt of Alzey it was decided to modify the wording to permit 20 families instead of 20 persons.

In the contract of lease of 1683, renewed in 1745, 1753, and 1762, ten names occur: Heinrich Neff (Trieb has "Neef"); Konrad Hiestand; Hans Jakob Forrer; Heinrich Gochnauer; Hans Jakob Brubacher; Jakob Dentlinger; Hans Leitweller; Peter Opmann; Heinrich Reif, and Ulrich Hagmann's widow. In 1745 there are 24 lessees listed. On the other hand the list of names required by the Palatine government contains 32 names of renters, and that of 1743 the same number, with a total of 170 persons. Of especial value is the register of 1752, which contains important family names (court records of the Karlsruhe Generallandesarchiv). According to a Dutch register there were in Ibersheim in 1732, 56 Mennonite families. (Müller, 212.)

An attempt made by the officer Zachmann of Alzey to have the Mennonites of Ibersheim treated exactly like those in Kriegsheim, Niederflörsheim, Heppenheim an der Wiese, Dackenheim, and Wolfsheim failed. The Ibersheim residents referred to their contract and letter of Concession. The official in charge reported to Zachmann that he was convinced that they were not mere renters, but had their own possessions and domicile. Thus the Mennonites of Ibersheim must have had the right of ownership as early as 1685; this was nowhere else the case in the Palatinate. This official was apparently favorable toward the Mennonites. His letter of 1685 to the elector states, "Everyone must give them the testimonial that they live quietly and peaceably, live in harmony with their neighbors, and have proven themselves more industrious than others, obedient to the government, true and constant in all things."

During the tribulations of the French attack on the Palatinate in 1697 the Ibersheim Mennonites paid the contributions levied by the French. In 1711 they were to be drafted as guards and for military service, but upon their petition a decision was passed on 27 January 1712 confirming their rights to exemption from military service. They repeatedly paid their exemption tax of 12 fl. per head, but were then released from the obligation. In 1742 this tax was again considered and debated over several decades on the ground that only those who leased the land were exempt, and not any later arrivals; furthermore the original number of 20 families had increased to 30. There was also some difficulty in connection with the burial of their dead in the community cemetery, but this was also settled in their favor.

Divine services were at first held in private homes. Later a special room was used for this purpose, described by the Lutheran tutor of the van der Smissen family in Altona, who visited Ibersheim in 1782 with his wards, as follows: "In the lower story of a two-story house is the school, which looked very handsome, clean, and orderly. Above to the right is a little room in which the schoolmaster lives, and to the left the room . . . for the meeting of preachers and elders before the service. Adjoining these rooms is the meeting-hall, which, in addition to the good points in its arrangement, has the defect of being very low. It is evident from the style of the building that the Mennonites built it soon after their arrival here."

The mid-19th century church was built in 1836. It was the only Mennonite church in South Germany with tower and bell. The church record stated, "The new church stands on the site of the old one, but the former church opened on the street, whereas the new one has windows on that side. On the lower floor was the school and a brewery, on the upper the church; but later on the lower floor was used as a church, and the former church became a school and council room. In 1822 the present organ was bought; previously the congregation had not used an organ to accompany its hymns." On 11 February 1866 two new bells were dedicated (Menn. Bl, 1866, 18 ff.). In 1891 the church was incorporated (Menn. Bl, 1891, 24).

In 1803 and 1805 two important conferences were held at Ibersheim, the results of which were known as the Ibersheim Resolutions (Ibersheimer Beschlüsse). Both sets of resolutions were signed for Ibersheim by the preachers Jakob Weiss, Heinrich Christoffel, Heinrich Forrer, and Johannes Stauffer, and the deacon Jakob Hiestand.

The Ibersheim church is a member of the Vereinigung, the Conference of South German Mennonites, and the Palatine-Hessian Conference. The latter met at Ibersheim several times.

In 1955 services were held every two weeks in winter, and every three weeks in summer. Communion was observed three times a year, viz., at Easter, Pentecost, and at the harvest festival.