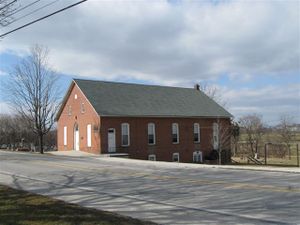 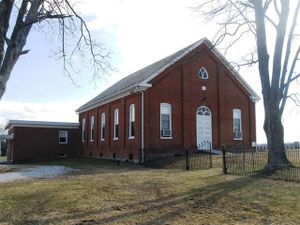 Mennonites settled in York County, Pennsylvania, in the 1700s and met for worship in private homes. Peter Blasser was the first minister known to be ordained in the district, about 1742.

Hostetters Mennonite Meeting House, in Adams County, Pennsylvania, gets its name from Bishop John Hostetter (26 January, 1791-5 October, 1866). He was a great-grandson of Bishop Jacob Hostetter who came to America as a Swiss Palatinate refugee in 1712 and purchased land in Lancaster County in 1716.

Worship services had been held in private homes but moved to the schoolhouse on the Hostetter farm around 1837. Bishop John Hostetter's will of 1857 bequeathed: "One acre of ground, including the school house and Cemetery to the Mennonite Congregation and for a burying place forever." A house of worship began to be built in 1854. For unknown reasons, the construction was not completed until about 1860 (after 1857 and before 1863). The cornerstone read, “MANO SIMON MEETING HOUSE 1854.” The 1854 building was used 45 years, after which the present building was erected in 1899. The cornerstone from the 1854 building is in the 1899 building.

Summer Bible School was begun in 1968. In 1971, the congregation added an educational wing to the Hostetters building with services every Sunday soon thereafter. A Christian School was established in the basement of the educational wing in 1975. After two years the school was moved to the basement of the Bairs meetinghouse. In the fall of 1979, the congregation requested a transfer from the Lancaster Conference to the Mid-Atlantic Mennonite Fellowship (MAMF). This request was granted in the spring of 1980. Richard Herr was ordained as bishop on 23 January 1983 for the Bairs-Hostetters congregation.

In 2013, David Keller and Kirk Diller were serving as ministers, and Donald Weaver was the deacon. Luke Weaver from Lancaster County began providing bishop oversight for the congregation after Richard Herr's retirement.

Sunday morning services were being held at Hostetters with prayer meetings and Sunday evening services being equally divided between the two buildings. Since 2003 the Bairs meetinghouse has also been used every Tuesday evening for the PEACE Ministries work among the youth and single mothers in the Hanover area. As of 1 January 2013, membership was 48.

Hostetter Mennonite Church, established in Union Township, Adams County, Pennsylvania, in 1845, was originally a member of the Lancaster Conference. The church has a cornerstone marked "Manosimon Meetinghouse Built AD 1854; Rebuilt 1899." This beautiful farming community was settled by Mennonites in the mid-18th century. The congregation met in private homes with Bair's Hanover and later a schoolhouse until 1854, when Bishop John Hostetter gave land for a church, and the first meetinghouse was built, later replaced by another one. Services are held here every four weeks. It is part of the Hanover-Bair's Hanover circuit. In 1955 it had 111 members.