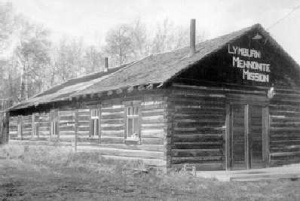 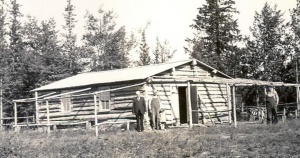 Mennonites from the Soviet Union arrived in the Acme and Swalwell area of southern Alberta in 1925 and were assisted by other Mennonites that had earlier settled in the area, including a number of Holdeman families. In the spring of 1926 the group of over a dozen families, including over 30 children and youth, settled in the Peace River area through the assistance of the Canadian Mennonite Board of Colonization, which helped the settlers purchase the Adair Ranch. The ranch consisted of 22 quarters of land, a large barn that could hold 100 horses, two houses, a blacksmith shop, and a pump house. The former owner, Henry Adair, assisted the newcomers for the first year in learning farming methods that were quite different with what they were familiar. The group worked the land together for the first two years

The Hoffnungsfeld Mennonite Church at Grande Prairie (Hoffnungsfelder Mennoniten Gemeinde zu Grande Prairie) was organized on 30 July 1927. The church was composed of local congregations that met in Wembley, Beaverlodge, and Lymburn. Elder Franz Enns of Whitewater, Manitoba, officiated at the organizational meeting. Jakob Thiessen from the Beaverlodge group was appointed to serve as leading minister, and Gerhard A. Neufeld from Wembley and Jacob D. Nickel from Lymburn also served as ministers. Neufeld and Nickel were ordained by Elder Cornelius D. Harder on 30 June 1929.

The church building in Wembley was constructed in the winter of 1928-29 and made of logs from the nearby bush. In Beaverlodge a similar church was constructed on the farmstead of Jakob Thiessen. A small Bible school operated in Beaverlodge for a few years. After he sold his farm and moved to Armstrong, British Columbia, the group met in homes. In Lymburn families initially met in the home of A. P. Regier. Minister J. D. Nickel was assisted by J. J. Wiebe and D. Z. Wiebe. A log church was built in 1933 on the Henry Funk homestead, three and a half miles west of Lymburn, and dedicated in July 1934. The group in Lymburn organized a Bible school with J. D. Nickel as instructor from January to March 1934. The school relocated to a log building on the Adair Ranch in Wembley in the fall of 1934, where Leonard Adrian was the instructor. This Bible school operated from the fall of 1934, when it had 11 students, until the spring of 1937. Those who wished to attend Bible school after the school closed attended the Bible school in Didsbury.

In the 1940s, many families moved away from the Wembley area, and by 1948 the congregation ceased to exist. Those who remained either joined the La Glace MB Church or other churches. In 1950 the Lymburn building was moved to a site one and a half miles west of Lymburn, where services were held until approximately 1970.