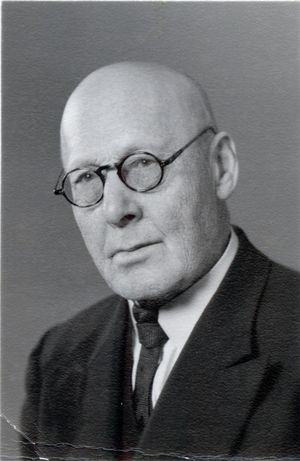 Jacob J. (J. J.) Hildebrand: born 10 August 1880 in the Molotschna Mennonite Settlement, south Russia, to Jacob and Agatha (Wiebe) (15 August 1855-13 May 1909) Hildebrand. He was the eldest of four children in the family. He married Katherina Wiens (28 January 1890-25 June 1936) on 29 June 1912, and the couple had one child. In 1924, the family immigrated to Canada. Jacob was the author of books and articles related to the Mennonites and was known for his interest in establishing a Mennonite homeland. He died on 18 January 1976 in Winnipeg, Manitoba.

In his early years, Jacob J. Hildebrand grew up with his parents, sister, and two much younger siblings in the Molotschna Mennonite Settlement of south Russia. After finishing his basic education, he trained to become a teacher but instead changed his focus to business. He spent a considerable amount of time travelling, first around Europe and North America in 1906 and then Japan, Korea, and Siberia in 1909.

After returning to the Molotschna, J. J. Hildebrand decided to move to Omsk, Siberia, where he met his future wife, Katherina Wiens. The two were married on 29 June 1912 in that city. On 17 November 1913, their only child was born, a daughter named Justina (1913-2005). Meanwhile, Jacob established a branch of the American International Harvester Company, while also working as a banker and as the proprietor of a lumber and mill company.

In addition, Jacob J. Hildebrand became involved in helping new settlers who were arriving. During the First World War, he assisted Siberian Mennonites in negotiating with the Russian leaders regarding provisions for conscientious objectors. Following the overthrow of the Tsar in 1917, he represented Siberian Mennonites at a conference in Ohrloff to discuss their future in the country, and he negotiated for Mennonite rights with various military leaders during the Russian Civil War.

In 1924, he and his wife and daughter immigrated to Canada, where they landed in Saint John, New Brunswick before moving on to a farm in Manitoba. Two years later, however, he and his family moved to the capital city of Winnipeg.

In his new home, Jacob J. Hildebrand became involved once again with helping newcomers through Mennonite Immigration Aid, a business-oriented agency that he helped establish to work in competition with the Mennonite Board of Colonization in bringing Mennonites to Manitoba. He also actively supported the idea of establishing a large, self-regulating Mennonite settlement in the province, much like the settlements in Russia. However, he was never able to achieve that dream, and he lost his job when the Mennonite Immigration Aid organization disbanded soon after Mennonite emigration from Russia ended in 1929.

In addition to his other work, Jacob J. Hildebrand wrote a number of books, including his Zeittafel, a chronological list of important dates in Mennonite history, and a book on Siberia. In addition, he wrote articles for various periodicals. After his wife died of cancer in 1936, he and his daughter moved to the area of North Kildonan, now part of Winnipeg. He died on 18 January 1976 in Winnipeg.

Jacob J. Hildebrand was a controversial figure due to some of the views that he expressed, but he made an important contribution to the understanding of Mennonites in Russia and Canada.