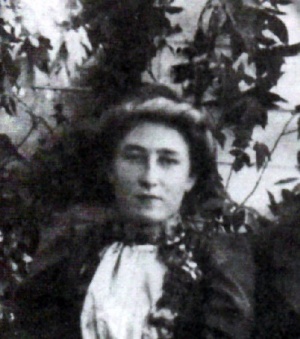 Susanna Hiebert, Mennonite midwife and chiropractor, was born on 17 January 1885 on a farm near Niverville, Manitoba, Canada. She was the fifth of 11 children born to Jacob S. Hiebert (1833-1906) and Katharine Hiebert (1855-1916) of which seven survived to adulthood. Susanna was baptized on 24 May 1904 and became a member of the Chortitzer Mennonite Church. That same year she married her cousin Jacob G. Hiebert (1882-1939). Together they had 10 children, eight sons and two daughters. She lost her second son Peter tragically when he was drowned at the age of five in 1913. In 1944 her son David was killed in Begium during the war and that same year her oldest daughter Katharina died suddenly of a brain hemorrage. After several unsuccessful attempts at farming Susanna and her family with the help of her two brothers, David Hiebert (1883-1946) and Peter Hiebert (1881-1974) settled in Heuboden, Manitoba. Susanna lived in Heuboden from the early 1920s until her death on 2 November 1949.

While living in Heuboden, Susanna Hiebert became a practicing midwife. She appeared to possess a natural ability for treating illness or injury and had learned much from her mother, Katharina Hiebert a well known Mennonite midwife. In addition, Susanna studied her mother's medical books which prepared her to give years of service to her community as a midwife and chiropractor/bonesetter ("Trajchmoaka"). Mennonites from a variety of churches came seeking Susanna's services as well as people from other ethnic and religious backgrounds. She accepted little payment for her care and if someone was treated on Sunday they were asked to deposit their payment in a small wooden box which was then donated for missionary relief. In the midst of the struggles and hardships that came with Canadian frontier life Susanna Hiebert was a kind and compassionate person who provided comfort and healing to many.