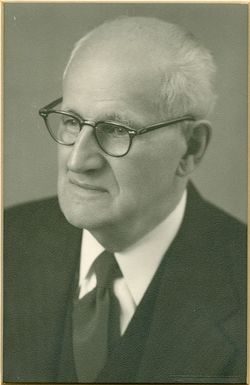 Cornelius attended public schools in Mountain Lake from 1888 until 1901 was baptized on 11 August 1895 in Carson Township. Because of a teacher shortage in 1903, he was granted a permit to teach in a new settlement in North Dakota, though he had only completed grade seven. Later he was granted another teaching permit and taught in Minnesota for a short time. During his time as a farm worker, at age 23, Cornelius felt a call. He decided that if he couldn’t get enough education to be a preacher, he would be a "Bible colporteur." His father bought him some Bibles and allowed the use of the wagon. He began to preach wherever he could, moving through several states. While in Oklahoma, he became acquainted with a nurse by the name of Tina Harms. Tina and Cornelius were married at the home of her parents in Medford, Oklahoma in 1908. After their wedding Cornelius and Tina moved to Minnesota to live with his parents.

The family moved to Hillsboro, Kansas in 1941, where they purchased their first house. Tina died suddenly in 1942. Cornelius was married in 1943 at Brotherfield, Saskatchewan to Helen Harms, sister of his late wife. Helen attended Tabor College in Hillsboro, Kansas, and taught school for 26 years after completing her studies there.

In 1948 Helen and Cornelius were invited by Mennonite Central Committee to Paraguay. For two years they walked or drove with oxen from village to village and from house to house, comforting, preaching, and helping people along financially with money received from friends in the United States and Canada. His wife capably conducted many services. After they returned to the United States, they reported on the work in South America to many churches. In 1952 the MB Conference sent them to Germany where they began work with refugee Mennonite families in Hümmerich near Neuwied. They helped start the MB Church at Neuwied. Between overseas assignments and after their return from Germany the Hieberts lived in Hillsboro, Kansas.

After his retirement from active ministry, the Hieberts moved to Reedley, California in 1955. C. N. Hiebert died in Reedley in 1975; his wife Helen died there on 2 March 1983.

C. N. Hiebert’s ministry as an evangelist extended to every corner of the North American Mennonite Brethren Church and beyond. Cornelius loved people and his ability to communicate the gospel to both young and old had a lasting impact on the life of the church.

Horch, Esther Hiebert. C. N. Hiebert Was My Father. Winnipeg: Board of Publications of the Canadian Conference of Mennonite Brethren Churches, 1979.