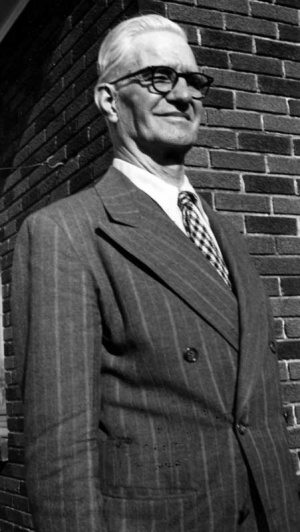 Elmer David Hess: pastor, mission worker; born 1 October 1884, the son of Abraham Lincoln Hess and Anna Pfautz Hess, who migrated to Kansas in 1884 from Ephrata, Pennsylvania in the company of some 20 extended family members. Abe and his brothers purchased a half section of 320 acres in Emma Township and planted a town called Hesston in 1886. They then sold commercial and residential building lots. Abe was a farmer, landowner and partner in several local enterprises including a creamery, a mill and the Hesston State Bank. He offered 80 acres of land for the establishment of Hesston College.

Elmer was the oldest of the family of 11 children.  As a young man he returned to Pennsylvania accompanying a carload of cattle sent East by his father. He lived in Akron, Pennsylvania and married Mazie M. Musser (15 October 1885-23 June 1948).  They had nine children: Ernest, Mildred, Anna, Marian, Abe, Kathryn, Allen, Cleland and Ruth.

Elmer and Mazie were sent by their church to the Home Mission in Chicago for about two years. From Chicago they moved to Selkirk, Ontario where he was ordained to the ministry in the Mennonite Church by S. F. Coffman in 1908. They returned to Pennsylvania, where he pastored the Masontown Mennonite Church in Fayette County (1910-1925) and supported his family by working for a contractor as a carpenter during the day, in addition to painting and paperhanging at night. He also did some part time school teaching.

The family moved to Belleville, where he pastored the Maple Grove Mennonite Church from 1925 through 1936. He was progressive and innovative in his ministry and, being a gifted music leader, he formed a women’s chorus at Belleville. He returned to Lancaster County in 1936 and became involved in the organization and leadership of a new congregation near Denver, Pennsylvania, the Emmanuel Mennonite Church. This congregation became a member of the Eastern District Conference in 1940 and the General Conference Mennonite Church in 1941. This is the only Mennonite congregation in the East that was made up of mostly Russian Mennonite immigrant families who settled in the Lancaster Conference area of Pennsylvania. Hess left Emmanuel in 1957 and served two short interim pastorates in Manns Choice and Roaring Spring in South Central Pennsylvania. He served more than 50 years in active pastoral ministry. As was the custom in those years, many pastors were bi-vocational. He followed the trade of carpenter and built two complete houses. He also worked at Lukens Steel in Coatesville, Pennsylvania. He worked at these trades into his late sixties and early seventies. Elmer Hess died 29 January 1972.