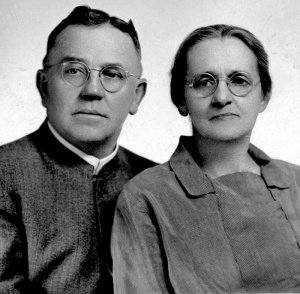 Tobias Kreider Hershey was born 14 March 1879 near Intercourse, Pennsylvania. He was the sixth son of Tobias Kreider Hershey, Sr., and Lydia Hartman Hershey. At eight years of age he felt the desire to become a missionary. He was converted at age 17 and the next year was appointed superintendent of a nearby mission Sunday School. He married Mae Elizabeth Hertzler (27 December 1904) at Concord, Tennessee. He graduated from Goshen College in 1911.

"T. K.," as he was known, took charge of the Youngstown, Ohio, Mission in 1911 and was ordained a Mennonite minister in 1913 at the Midway congregation, Columbiana, Ohio. When he suddenly lost his voice in 1914, his physician advised a change of climate, so he went to La Junta, Colorado and six months later was joined there by his wife and children. In 1916 he pastored the Zion congregation at Bluffton, Ohio. On 16 August 1917 he and his family, together with the J. W. Shank family, left for mission work in Argentina under the Mennonite Board of Missions (Mennonite Church). T. K. served in central Argentina as a pastor, bishop (ordained in 1925 at Columbiana, Ohio), evangelist, superintendent of the Argentine Mission, financial agent, and printer. The Hersheys retired from the Argentine mission service in April 1948. In 1949 they served one year as church workers in Puerto Rico.

After returning to the United States, T. K. and Mae Elizabeth were active in missions, evangelism, discipling, church planting, and Bible teaching in the United States and Canada. He died 31 October 1956 at Goshen, Indiana, and was buried in the Hershey Mennonite cemetery near Kinzers, Pennsylvania.

Warkentin, A. and Melvin Gingerich, compilers. Who's Who Among the Mennonites. North Newton, KS: Bethel College, 1943: 105.

Hershey, T. K. as told to Daniel Hertzler. I'd Do It Again. Elkhart, IN: Mennonite Board of Missions, 1961.