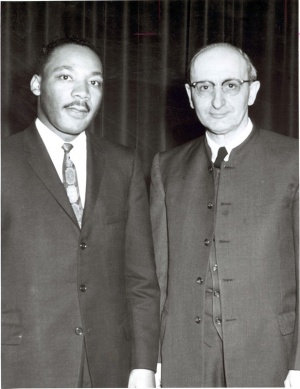 Guy Hershberger was born 3 December 1896 in Johnson County, Iowa, the first of nine children of Ephraim D. and Dorinda Kempf Hershberger. He was baptized in 1909 at the East Union Amish Mennonite Church. After graduating from high school in 1915, he taught in rural schools until his marriage to Clara Hooley, of Goshen, Indiana, on 1 August 1920. Their two children were Elizabeth (Bauman), born in 1924, and Paul, born 1934.

Guy and Clara both enrolled at Hesston College in the fall of 1920 and graduated in 1923. He taught in the Hesston Academy, 1923-1924, while Clara served as dean of women. After Sanford C. Yoder, formerly the pastor at East Union, invited him to join the faculty of the reopened Goshen College, Hershberger earned an MA degree at the University of Iowa in 1925. Further graduate study at the U. of Chicago and Iowa led to the PhD degree (Iowa, 1935), with a dissertation on Quaker politics in colonial Pennsylvania. Hershberger's long career at Goshen, teaching history, sociology, and ethics, began in 1925. He helped found The Mennonite Quarterly Review(1927) and continued on its editorial staff throughout his life, serving as editor in 1963-1965.

See Kingdom, Cross, and Community. Scottdale, 1976, an 80th-birthday tribute to Hershberger, edited by J. R. Burkholder and Calvin Redckop, especially the essays by Theron Schlabach, Leonard Gross, and Robert Kreider, and the bibliography of Hershberger's writings (1922-1976);