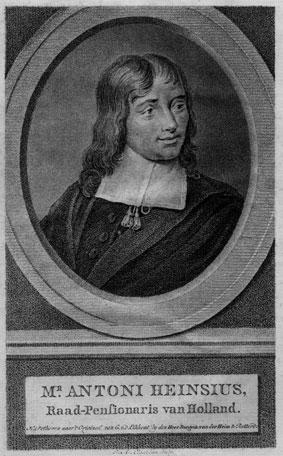 Anthonie Heinsius was born 1641 at Delft, and died 1720 at The Hague. He was a Dutch statesman (1689), Grand Pensionary of the territory of Holland and cooperator with Stadholder William III of Holland who in 1689 also became King of England. Heinsius, who played an important part in European politics, especially against the supremacy of France, and who belonged to the Reformed Church, should be mentioned here because of his loyalty and help to the Mennonites. He protected the Mennonites of Holland against oppressive measures of the Reformed ministers, and in 1710, informed by the Mennonite ministers Cornelis Beets of Amsterdam, Matthijs Diepenbroek of Haarlem, and Adriaen van Alkmaer of Rotterdam of the troubles which the Bernese Mennonites had with their government, he instructed (14 March 1710) the registrar Francois Fagel to draw up a strong protest, which was approved by the States-General of the Netherlands on 15 March, and was sent to the city council of Bern, Switzerland. In this address a protest is made against the Bernese policy of punishing the Mennonites in this territory with imprisonment, exile, galley slavery, and even death. This protest is found in Inv. Arch. Amst. I, No. 1759 and published in DB (1909): 132-35. Again in 1711 Heinsius acted in behalf of the persecuted Bernese Anabaptists.