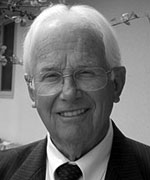 In 1956 Hein became assistant pastor of the Hillsboro Mennonite Brethren (MB) Church. After three years he became the senior pastor and served until 1980. While in Hillsboro he was an assistant and adjunct professor of New Testament at Tabor College.

In 1980 Hein was called to Fresno, California as pastor of the North Fresno Mennonite Brethren Church. He served that congregation until 1991 when he became the executive secretary of the General Conference of Mennonite Brethren Churches. For 11 years, he travelled the U.S. and Canada preaching, representing the conference, and finally heading the committee that arranged for divestiture of the General Conference in 2002. Hein retired in 2002.

One of the highlights of Hein’s life was his 17-year involvement with Mennonite World Conference (MWC) from 1967 to 1984. He served as vice-president, representing North America, for two three-year terms. In his MWC role, he traveled to more than 50 countries and to five global assemblies.

Hein served on the governing boards for Tabor College, Fresno Pacific University, and Mennonite Brethren Biblical Seminary (MBBS), where he also taught in the area of homiletics. In 1989, MBBS awarded him its first honorary doctorate.

Beyond the MB Church, Hein served on the National Association of Evangelicals board, represented Mennonite Brethren on the Council of Inter-Mennonite Moderators and Secretaries, and the board of Herald Publishing Company.

After preaching thousands of sermons, Hein compiled some into two books, The Ties That Bind, on varied topics, and Like a Shock of Wheat, based on his funeral messages. He wrote a monthly column in The Christian Leader for 15 years and was a regular contributor to the inter-Mennonite devotional booklet Rejoice! for 31 years.

Hein was considered one of the greatest preachers of his generation. Throughout his life, whether in worship, preaching, gardening or golfing, Hein always aspired to excellence and wanted God’s business to be done with finesse.