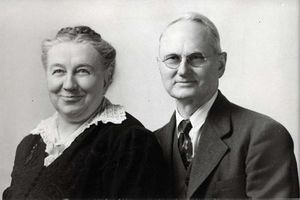 Frank E. Hein, Jr., a Krimmer Mennonite Brethren evangelist and missionary, was born 14 August 1878 in Gnadenau, Marion County, Kansas, USA. He was the son of Prediger Frank E. Hein, Sr. (29 November 1849-19 September 1904) and Helena Friesen Hein (14 April 1856-18 March 1900). He was the fourth of 14 children and the oldest of seven to survive childhood. The Heins and the Friesens comprised two of the initial 34 families from Annenfeld, Crimea to settle at Gnadenau in 1874. Frank Hein had a "Road to Damascus" experience in 1893 while driving a hay wagon in Ramona, Kansas. From that time forward he dedicated his life to missionary and church work.

The Hein family moved from Kansas to Pueblo, Colorado in 1895. In late 1900 Frank left Pueblo to attend the Light and Hope Bible Institute in Cleveland, Ohio, part of the charitable organization of John A. Sprunger of Berne, Indiana. Frank worked in the Light and Hope Printing Plant while in school and developed a lifelong fascination with printing technology and its ability to spread the Gospel. In addition, three of Frank’s sisters (Anna, Helen and Kathryn) were orphans and later workers at the Light and Hope Orphanage in nearby Birmingham, Ohio.

In December 1901, Joseph E. Ramseyer, long serving president of Fort Wayne Bible College and the Missionary Church Association, thought so much of the the college sophomore that he came to Pueblo four days before Christmas to preach with Frank Hein. The Hein and Ramseyer families remained very close over the years.

After graduating from the Light and Hope Bible Institute in the winter of 1905, Frank Hein began the first of three long missionary tours he made in Nigeria during 1905-1919. The Toronto-based Sudan Industrial Mission sponsored the first two tours. The Christian and Missionary Alliance sponsored the third tour.

After meeting with Daniel Kauffman at the Mennonite Publishing House on their return to North America in the fall of 1919, the Heins proceeded to Reedley, California. In spring 1920 they broke with the Mennonite church and moved to Portland, Oregon to help found the Apostolic Faith Church, a Pentecostal denomination. The only explanation ever offered by the Heins on the move away from the Mennonite church was that they felt an attraction to the strong emotional content of Pentecostal movement, then in its infancy.

The Heins spent the rest of their lives in Portland serving the Apostolic Faith Church. Frank worked in their printing plant translating many Bible segments and religious tracts into Nigerian languages. He had a gift for languages, speaking and writing 14 languages, including eight Nigerian languages. Both Frank and Agnes worked on the annual summer camp meetings of the Apostolic Faith Church for many years.

Frank Hein died on 15 November 1958 in Gresham, Oregon. Agnes died on 22 October 1959 in Portland. They are buried in Lincoln Memorial Cemetery in Portland. The couple had no children. Frank and Agnes Hein were frequently described as patient and humble servants of the Lord.

Lehman, Douglas M. From Gnadenau to Gresham: The Life of Pioneer Missionary and Evangelist Frank Hein. North Manchester, Indiana: HP Global, 2016. Frank and Agnes Hein authored over 100 letters concerning their missionary work, which were published in various Mennonite newspapers, as well as a number of monographs concerning Nigerian missionary work. These documents are a part of volume 2 of this work.