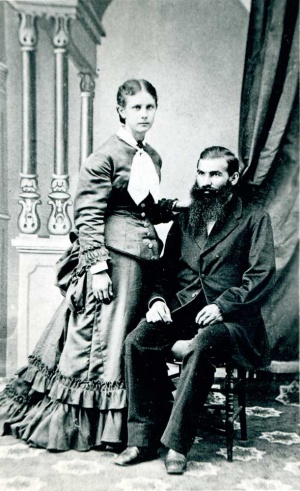 Samuel S. Haury: Mennonite (General Conference Mennonite) missionary; born 21 November 1847, near Ingolstadt, Bavaria, Germany, emigrated with his parents to America in 1856, and settled on a farm near Summerfield, Illinois. He was married to Susie L. Hirschler in November 1879. Seven children, four daughters and three sons, were born to this union.

Haury received his elementary education near Summerfield, Illinois, and then entered Wadsworth Seminary when it opened its doors in 1868, and was graduated in 1871. Later that year he went to Barmen, Germany, to take a theological course and was graduated from there in 1875. He then entered Jefferson Medical College at Philadelphia, Pennsylvania, but his studies were interrupted when he became ill with spinal meningitis. After serving in the mission field he entered St. Louis Medical College (Washington Medical) and received his degree in 1889.

Haury was the first missionary sent out by the General Conference Mennonites. In 1879 he and J. B. Baer visited Alaska as a possible mission field for the Conference. He entered mission work among the Arapahoe Indians in Indian Territory (Oklahoma) in 1880. Here he served for seven years as the first missionary not only of the General Conference but of all Mennonites of America. He was the author of a number of pamphlets: Briefe über die Ausbreitung des Evangeliums in der Heidenwelt (Heilbronn, 1878); Bericht von dem Missionar Haury an die Mitglieder der Missions-Behörde (1882); Die Wehrlosigkeit in der Sonntagschule (Dayton, 1894).

After graduating from medical college he practiced medicine in Moundridge, Kansas, until 1894, and in Newton until 1913, when he moved to Upland, California, remaining there with his family until his death on 19 May 1929.