Hasselbach, a village (1925 population, 239; 309 in 2006; coordinates: 49° 15′ 32″ N, 8° 59′ 19″ E) in the Sinsheim district of Baden-Württemberg, Germany, three miles northeast of Steinsfurt, the seat of a Mennonite church, concerning whose origin little is known. The fact that in 1575 the Dutch Mennonites sent three preachers to the brethren in the Neckar Valley (see Grombach) proves that there were Anabaptists here in the 16th century. Another clue to the existence of this early congregation is the name Wiedertäuferkirche given to part of a forest an hour northeast of Hasselbach (Mennonitischer Gemeinde-Kalender, 1904: 142). During the period of persecution and before they were tolerated they seem to have met for services in remote places.

In the 17th century the Anabaptists in the Sinsheim district were still compelled to hold their meetings secretly in forests. Thus in 1653 the parson Johann Friedrich Schärer of Hilsbach reported to his inspector in Sinsheim that the Mennonites were planning a marriage ceremony in a forest. That they met in forests was also confirmed by the leaders of a Mennonite meeting attended by 53 persons in Steinsfurt at nine on the evening of 2 March 1661, in the home of a widow, which was disbanded by the authorities when they began to sing. Five of the participants had to be security for all the rest, whose names were taken, and to vow to present themselves for punishment. On 29 March they explained to the authorities at Hilsbach that they had come into the country with their brethren in 1655, all of whom came from Switzerland, and that they had frequently during the summer assembled quietly in the forests near Steinsfurt, without informing anyone. They would not cease to hold meetings; they would prefer to emigrate. The government fined them (6 July 1661) 100 Reichstaler for meeting secretly. But they continued to meet every Sunday. In reply to an inquiry by Inspector Peter Grill in Sinsheim, 16 November 1661, whether he should let the Mennonites continue, Elector Karl Ludwig ordered (4 January 1662) that the Mennonites should no longer be forbidden to meet, in spite of an opinion by the church council of 6 December 1661, recommending the contrary. But every participant was to pay a fee each time he attended a meeting. An electoral concession of 4 August 1664, ended the taxation of their services, but not more than 20 persons were permitted to attend (Mennonite court records in the Generallandesarchiv at Karlsruhe). 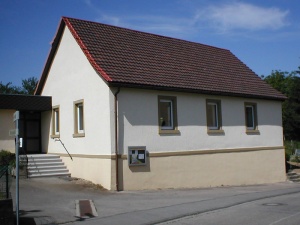 The Mennonites living in Hasselbach and vicinity today are all of Swiss descent. When their ancestors were expelled from Bern at the close of the 17th century they were received on the estates of the knighted nobles. Most of these estates were farmed for generations by Mennonites, as in Ehrstädt, Helmstadt, Grombach, Ober- and Unter-biegelhof, Rauhof, and Wagenbach. A congregation was formed in Hasselbach; the earliest reference to it is in 1731, when it numbered 18 families, whose heads are named by Ernst Müller (Berner Täufer: 209). Their preacher was Abraham Zeisset of the Rauhof, who frequently visited the Swiss churches (church records of the Sembach Mennonite Church, p. 260) and maintained connections with the churches of the Palatinate and in Danzig (Mennonitischer Gemeinde-Kalender, 1896, 89; see also 1930, 140-42; also Müller, 212 f.). The Büchelhof and Helmstadt congregations later merged with the Hasselbach congregation.

The Dutch [[Naamlijst der tegenwoordig in dienst zijnde predikanten der Mennoniten in de Vereenigde Nederlanden|Naamlijst,]] which calls this congregation "Hasselbach, Martishof, Helmstein, and Senfeld," lists the following preachers in the 18th century: Hans Kaufmann from 1754, Hans Grebeil (Krehbiel) from 1761, Abraham Schmutz and Christian Schmutz from 1764, Abraham Krehbiel and Johannes Bechtel from 1767, Georg Hotel from 1786, and Jacob Funck from 1792.

In the 19th century the congregation was the center of the Mennonites of Baden. Its elders Ulrich Hege of the Unterbiegelhof and Heinrich Landes of Ehrstädt, with Christian Schmutz of the neighboring church at Rappenau, were the most prominent leaders of the churches in Baden. In the 20th century the Hasselbach congregation suffered a decrease by emigration to other districts.

Many Mennonites in Württemberg and southern Bavaria are descendants of former Hasselbach members. With Ober- and Unterbiegelhof the village of Hasselbach had 45 Mennonites in 1821. It was thus the fourth largest congregation in Baden: Mannheim had 93, Dühren 54, and Ittlingen 46 members. In 1925 there were only 19 Mennonites living in Hasselbach, 33 in Ehrstädt, 22 in Helmstadt, 21 in Neckarbischofsheim (the part of Helmhof in Baden), 12 in Grombach, 5 in Flinsbach, and one each in Babstadt and Obergimpern. The six Mennonites living in the Hessian enclave of Helmhof were also members of the Hasselbach congregation, which in 1935 numbered 135 souls. In 1953 the baptized membership was 86, the elder was Heinrich Funck (ordained 1943), deacon David Moser (ordained 1939). Since 1846 the congregation has had its own meetinghouse, until recently the only Mennonite meetinghouse in Baden-Württemberg. Services are held every Sunday and holiday.