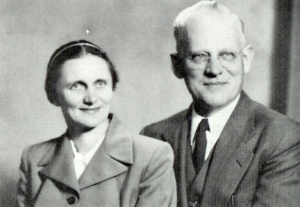 Abraham attended public school in his home village of Rosenort, high school in Alexanderkrone, and teacher training school in Halbstadt. He accepted the Lord while in public school and was baptized 15 August 1915 in Steinbach, Molotschna. During World War I he served in the medical corps on the Western Front.

Following in the tradition of his parents, Abraham was instrumental in establishing orphanages for Russian children, first in Halbstadt and later also in Schönau. Because he gave religious instruction in the schools, which was contrary to governmental regulations, he was taken to court but miraculously released. After much hardship the family was able to move to Germany where he was active in the church, both in its mission outreach and youth work. On 29 March 1931 he was ordained as an elder.

In 1935 Abraham accepted a call to go to Paraguay to serve as a teacher and minister. In Paraguay he became pastor of a Mennonite church. His wife Helena died in 1940 and Abraham remarried Margaret "Gretel" Bartel in 1947. From 1944 to 1950 while serving as elder he also taught in a Friesland high school.

On 26 April 1951 Abraham and his family immigrated to Canada where he taught at Bethel Bible Institute in Abbotsford, BC for four years from 1951 until 1955. He served at West Abbotsford Mennonite Church from 1952 to 1963 as elder and assistant pastor, and also served the East Chilliwack (later Eden) Mennonite Church as elder until 1962. After retiring due to chronic headaches he joined and helped occasionally in the Eben-Ezer Mennonite Church until his death.

Peters, Gerhard I.  Remember Our Leaders: Conference of Mennonites in Canada.  Clearbrook, BC: The Mennonite Historical Society of British Columbia, 1982.