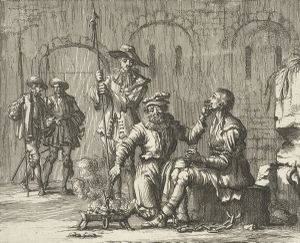 Hans Bret, an Anabaptist martyr, the son of the Englishman Thomas Bret and Elisabeth Akers van der Does of Dordrecht. By trade he was a confectioner. Through betrayal he was seized on 6 May 1576. He was severely treated, being cast into a dungeon. He was frequently examined. Since he was well educated—he had a mastery of Latin—he was well able to withstand the inquisitors. In spite of his youth he remained steadfast, and died at the stake in Antwerp on 4 January 1577, at the age of 24. The tongue screw with which the executioner closed his mouth to prevent his speaking was hunted out of the ashes by the well-known preacher Hans de Ries. This tongue screw with a certification by Trijntje Simons is preserved in Amsterdam, and has been handed down from generation to generation in the possession of the de Hoop Scheffer family.

The charge made against Bret was that he possessed forbidden books, that he had been rebaptized and had frequently attended the forbidden meetings of the Anabaptists, each Sunday morning giving religious instruction to a group of baptismal candidates (aankomelingen). Bret had been a servant of Albert Verspeck, who later was a preacher of the Waterlander Mennonites in Holland (Cramer, Samuel and Fredrik Pijper. Bibliotheca Reformatoria Neerlandica. VII: 248). Hans de  Ries, who was a friend of Bret, and who had been present at the execution of his friend, married Bret's mother soon afterward. Hans's brother David Bret lived in England, where his father came from. From prison Hans wrote a number of letters to his family, to the congregation of Antwerp, and to friends, the first of which is dated Monday after Pentecost 1576, the last August 1576. In these letters he complained that he lacked writing paper. He wrote that there were imprisoned with him more of Menno's "Volk" at that time; singing of hymns, which would have given them much comfort, had been forbidden. Soon after his death a volume was published under the title De Christelijcke Seyndtbrieven gheschreven door eenen vromen Christen genaemt Hans Bret, printed in 1582 (n.p., likely at Antwerp; a copy is in, the library of the University of Gent, Belgium). This volume contains 18 letters by Bret and 6 letters addressed to him in prison, three of which were probably written by his friend Hans de Ries; besides these letters this book contains Bret's death sentence and two songs celebrating his sufferings. Of this collection six letters are found in van Braght's Martyrs' Mirror; viz., the first three, the tenth, and the last two. Three of these were written to his mother, one to his brother David, one to his sister, and one to Hans de Ries.

Braght, Thieleman J. van. The Bloody Theatre or Martyrs' Mirror of the Defenseless Christians Who Baptized Only upon Confession of Faith and Who Suffered and Died for the Testimony of Jesus Their Saviour . . . to the Year A.D. 1660. Scottdale, PA: Herald Press, 1951: 1037-54. Available online at: http://www.homecomers.org/mirror/index.htm.