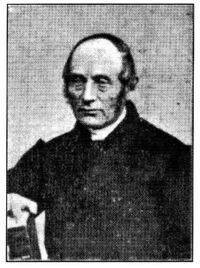 David and Anna immigrated to Russia from Prussia by 1853 and settled in the village of Hahnsau in the Trakt settlement. He was elected as minister of the Köppental-Orloff Mennonite Church, Trakt settlement, Samara, in 1853?, and served as elder from 1858 to 1884. During his eldership the congregation was greatly disturbed by the activities of Claas Epp, Jr. When Epp published his Die entsiegelte Weissagung des Propheten Daniel und die Deutung der Offenbarung Jesu Christi Hamm wrote the preface (1877) emphasizing the second coming of Christ, at which time He would find only "a little flock" of faithful followers. He states that Epp was "compelled by the spirit of God" to write this book. The Mennonites of the Trakt settlement in general had been influenced by Jung-Stilling, Christian Clöter, and other chiliastic writers before they left Prussia (Bartsch, Unser Auszug, p. 7). However, when Claas Epp, Jr., became more and more extreme in his proclamations the sounder elements of the congregation under the leadership of Hamm opposed his views (Bartsch, p. 25), and Epp and his group withdrew from them and moved to Central Asia.

David Hamm was instrumental in establishing the Allgemeine Mennonitische Bundes/Konferenz, for which he preached a much-appreciated conference sermon at Halbstadt in 1883 proclaiming the motto of the conference based on I Thessalonians 5:12-15 as being "Unity in major issues, freedom in minor questions, and charity in everything." In 1869 the Köppental and Alexandertal congregations of Samara sent letters to the Prussian congregation stating that they could not have fellowship with those that accepted the edict providing for noncombatant service. It is likely that David Hamm took the initiative in this matter. His signature stands first on the list. David Hamm compiled the Choral-Buch für den Kirchen-Gesang der Mennoniten-Gemeinde an der Wolga. Danzig, 1859.

David Hamm was removed from his eldership office when Johann Quiring was elected to replace him.

A few months after David Hamm’s wife died, there was a report that he and a J. Klassen had been on a pleasure trip to Moscow and St. Petersburg, where they had been lured into playing cards and had lost 175 rubles. About the same time, a rumour was spreading that David Hamm had had an affair with the church caretaker’s daughter. Hamm confessed the card playing incident to the congregation on 24 July 1883, but denied that there was anything inappropriate between him and Anna Krueger. Several months later in December 1884, Hamm announced to the ministerial, that he intended to marry Anna Krueger in the near future. There was truth to the rumour he had earlier denied. Having lost faith in his leadership, the congregation elected Johann Quiring as his successor as elder in June 1884.

After David Hamm’s marriage to the young 20-year old Anna Krueger (1864-1889) on 14 June 1884, they are said to have lived in the teacher’s house for a time, implying that he may have had the role of village school teacher for a while. The marriage produced 3 children, of which only the first one survived to adulthood, and the youngest died in July 1889 two weeks before his wife Anna died.

In December 1890, it was reported that David Hamm was boarding with a widow J. Harms, was horribly addicted to morphine, had forgotten how to wash and comb himself, and that his room was so filthy and dirty at times that it was unfit for human habitation.