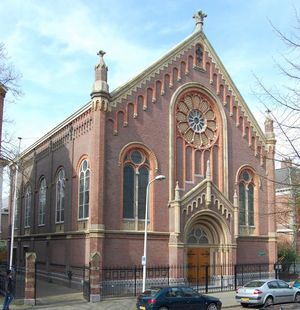 As early as 1534 Meynart van Emden went to The Hague from Delft to perform baptism. Cornelis Kelder, whom he had baptized and who was condemned to death on 11 October 1536, was from The Hague. On 9 September 1538, Adriaen (or Paulus Adriaensz) from The Hague was burned at Vught. This could indicate that a congregation existed at this place, which met in a home at the Spui. In 1557-1561 Leenaert Bouwens baptized seven persons (according to another list 14), and in 1563-1565 thirty-one more. This is evidence that a Flemish Mennonite congregation of some size must have existed here, which at the beginning of the 17th century met at the Kort Achterom and after 1642 in the house "de Rosencrans" on Herdersstraat. Evidently the congregation had no elder, since on 6 January 1643, Tobias Govertsz van den Wijngaert of Amsterdam was asked to come to perform baptismal services. During the middle of the 17th century the congregation was without a minister for some time. Before 1679 the congregation united with the Waterlander church of The Hague through the mediation of its elder Maerten Pieterze. This united congregation remained for some time. In 1730 it made its meetinghouse "de Rosencrans" available to the Reformed, and on 18 January 1752, when David Koster, the sole surviving member, died, he willed the property of the congregation to the Mennonite Church of Leiden.

In 1879 it was apparent that there was a sufficient number of Mennonites living in The Hague to start worship services. Upon instigation of H. M. de Vries, S. Hingst, J. Kalff, G. de Vos, and H. L. Boersma monthly meetings were started in September of that year and held in the Remonstrant church. C. Sepp, pastor of the Leiden Mennonite Church, was the leader of the group and on 14 March 1880 he performed the first baptismal service. After 11 September 1881 the group met biweekly and on 27 September of that year the congregation was organized with 47 charter members. Before the end of the year it had a membership of 130. The church council of the Leiden congregation which had managed the property of the former Hague congregation now returned it to the new Hague congregation. On 1 April 1883, S. de Waard of Westzaan became the minister of the congregation and on 5 September 1886, the congregation had its first worship service in its new church located on Paleisstraat. When de Waard resigned on 7 October 1894, a call was extended to D. Kossen from Den Helder who began his service on 5 May 1895, but left the congregation on 2 January 1898. He was succeeded by H. J. Elhorst from Arnhem who served the congregation from 26 June 1898, to 4 November 1900, who in turn was followed by S. Lulofs of Deventer on 5 May 1901. Under his leadership the congregation grew rapidly and on 1 May 1910, G. Wuite Jzn of Arnhem began his service as second minister of the congregation. On 21 October 1911 they started using an educational wing which had been erected behind the church. On 9 September 1929 S. Lulofs, who had died on 5 September 1927, was succeeded by A. Keuter of Akkrum. On 4 January 1944 he was arrested by the German occupational authorities and died in the concentration camp Bergen-Belsen on 10 March 1945. On 12 May 1946, he was succeeded by J. E. Tuininga of Arnhem, who resigned in 1955.

Under the ministry of Lulofs and Wuite the congregation experienced its best growth and when Wuite retired 25 October 1938, it was desirable to have two ministers take his place. On 20 November 1938, P. Vis of Arnhem and H. W. Meihuizen of Veendam began their ministry. The need for additional room for congregational activities such as administration, deaconess work, young people's meetings, and choir practice, was met when a house next to the church was purchased for this purpose. When P. Vis died on 13 August 1942, no one was called to fill the vacancy because of the uncertain conditions during the German occupation. After Pastor Keuter's arrest O. T. Hylkema was called from Bussum and began his ministry on 16 April 1944.

Soon after the organization of the congregation its membership was 150; at its twenty-fifth anniversary it was 1,200, and at the fiftieth anniversary it was 3,000 (1931). The largest membership was reached in 1943 with 3,200 members. Since that time the number decreased and in 1953 was a little over 3,000. Since 1911 the congregation has published a Maandblad containing information regarding congregational activities, which was combined with the paper of the Leiden congregation from 1942 to March 1947. Since that time the reports appear as an insert in the Algemeen Doopsgezind Weekblad. From 1911 the ministers of the congregation served a group of Mennonites at Delft which became an independent congregation in 1923. After 1946 a group of Mennonites in Gouda was served. The field of service of the congregation extended not only over the city but also included Scheveningen, Wassenaar, Leidsendam, Voorburg, Rijswijk, Zoetermeer, Loos-duinen, and a part of Westland. This territory was divided into 44 districts in which special meetings were held.

Other expressions of congregational life in the 1950s were Sunday school, three groups of the Menno Simons Kring for younger people and two for older members, which bore the name of the first and the last martyr of the congregation, Cornelis Kelderkring and Albert  Keuterkring. There were four ladies' groups, a choir, and various organizations for special causes. During the winter months various courses were offered and six congregational evenings were held. The presentation of a Christmas pageant became a tradition.

The founding of the congregation at The Hague stimulated the Mennonites of Berlin, Germany, to establish a congregation, according to an article in De Zondagsbode of 3 February 1889.