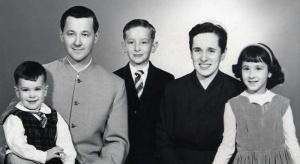 Merlin R. Grove: farmer, missionary, martyr, was born on 9 February 1929, the fourth of five children to Russell and Annie (Byer) Grove in Markham, Ontario, Canada. He was baptized on 4 May 1942 at the Wideman Mennonite Church. He married Dorothy Bechtel (21 October 1926-6 November 2010) on 11 September 1951. They had three children; Bruce, Pauline and David.

During World War II Grove attended Ontario Bible School now Niagara Christian College then settled down to become the fifth generation to farm the family homestead. After five years on the farm, Merlin and Dorothy became involved in mission work in Toronto and during the winter months, he began attending Toronto Bible College. There he heard of the need for workers among the Somali and the Sudan Interior Mission speaker encouraged him to seek out opportunities. "God can’t steer a parked car," said the speaker.

The Groves contacted Eastern Mennonite Board of Missions in Salunga, Pennsylvania and they were accepted for service in Somalia. He was ordained to the ministry for overseas service on 1 May 1960 at Wideman Mennonite Church by Emerson McDowell.  The Groves arrived in Somalia where Merlin, Dorothy and family settled in Mahaddei. Merlin began teaching mathematics and serving as principal for the boys school at Mahaddei Uen.

By January 1962, Grove was asked to become the mission secretary for the Somali field while Wilbert Lind went home on furlough.  Even though the school was forced to close due to political and religious tension, Merlin’s spirits were not dampened. Merlin's parents ventured to Somalia in March 1962 for a visit. Later Merlin's father, Russell Grove, remarked, "I have never seen Merlin so happy and content with his family and his life." The Groves with their three children moved to Mogadishu, the capital city, in March 1962 just as the government under pressure from Islamic extremists closed down all work of the Mennonite mission.

Our activities are still curtailed, ... but still we have good hope of opening up soon. In spite of the fact that there are no classes just now, we are kept busy with repairs to the buildings. I am kept pretty busy running around to offices in the town and writing letters to the Prime Minister. Yesterday I had an interview with the secretary of the Minister of Education.... He was very cordial and gave me some good advice as to what to do next in my contacts.

In July the government granted permission to reopen the schools and on 16 July registration began for the new courses. A mullah came into the room and for a while watched the proceedings and when Grove's colleague, Harold Stauffer, turned his back, the mullah stabbed Grove several times and then turned on Stauffer who escaped. Dorothy Grove, hearing the commotion, ran toward the office and was also stabbed, but managed to crawl away.  Grove died almost immediately and Dorothy was taken to a hospital where she recovered from her wounds. She and the children remained in Somalia several months until she was well enough to travel. Merlin Grove's body was buried in Somalia in the Protestant section of the Catholic Cemetery in Mogadishu. A memorial service was held at the Wideman Mennonite Church on 25 July 1962.

Grove’s assailant was later arrested and at the trial Harold Stauffer, speaking on behalf of the Mission staff and Dorothy Grove, read a statement of love and forgiveness. The assailant was given a life sentence. Merlin Grove's life and faith are not forgotten.