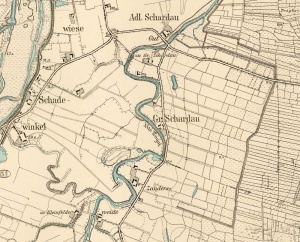 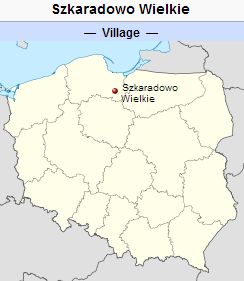 Groß Schardau was established as a result of the granting of settlement contracts. In 1664, the village was composed of 402 hectares of pasture, on which there lived 5 Dutch settlers. In 1758, Tekla Bielińska granted 117 hectares of land to the following settlers: Stephan Balzer, Wilhelm Unrau, Heinrich Kwap and Cornelius Jantzen, for 30 years. In 1786, Groß Schardau experienced a major flood, causing significant damage.

The First Partition of Poland in 1772 resulted in the creation of a new province on 31 January 1773, called West Prussia, in which Groß Schardau was located. Groß Schardau was situated in the district (Kreis) of Stuhm in Regierungsbezirk Marienwerder until the end of World War I, when it came under the jurisdiction of East Prussia. The village came under the control of Nazi Germany during World War II until March 1945, when it was occupied by Soviet forces and returned to Poland. In 2013 Szkaradowo Wielkie was a village in the administrative district of Gmina Ryjewo, within Kwidzyn County, Pomeranian Voivodeship.

The 1776 Prussian census lists six Mennonite families in Groß Schardau with the following surnames: Baltzer, Goertzen, Jantzen, Penner, and Unrau. In 1824, seven Mennonites were landholders in Groß Schardau. In 1885, the village was inhabited by 21 Catholics, 9 evangelicals and 18 Mennonites.

Mennonites who were residents of Groß Schardau were members of the Tragheimerweide Mennonite Church.