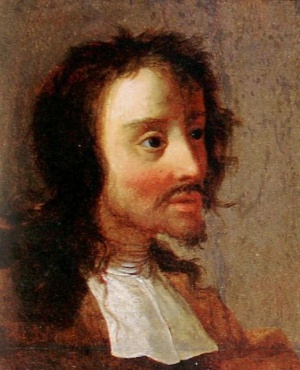 Hans Jakob Christoph von Grimmelshausen (1621-17 August 1676), author of the famous novel, Der abenteuerliche Simplizissimus, published in 1668. In book V, chapter 19, he gives a remarkable picture of "Hungarian Anabaptists" and their communal way of living, and there can be no doubt that Hutterite colonies in Slovakia are thus portrayed. Grimmelshausen tells us that he had discovered "a manner of living for human beings which is more angelic than human. It would happen if a group of men and women, both married and single, would unite and live according to the manner of the Anabaptists. That is, they would have to earn their living with the work of their hands under the guidance of an expert leader, and to spend the rest of their time with the praise and worship of God." And then he continues, "Once I saw such a life in the Anabaptist communities in Hungary [Slovakia]. Were they not involved in heresy I certainly would have liked to join them. At least I would have called their way of life the most blessed in the world." And then Grimmelshausen has no other comparison for these colonies than with the Jewish Essenes as described by Josephus who likewise practiced community of goods. "They have great treasures," he tells us, and modern research bears it out, "and plenty of food, which they, however, wasted in no way. No curse, no grumbling or impatience was heard among them, indeed no idle word at all. There I saw craftsmen working in their shops as if they were hired; their schoolteachers instructed their youth as if they were their own children. Nowhere did I see men and women together; each sex did its definite work at separate places. I found rooms in which there were only mothers of newborn infants, who were well provided for with nursing care, in other rooms nothing could be seen but many cradles with infants cared for by women appointed to this task, so that the mothers did not need to concern themselves except three times a day when the children were brought to them to be fed. The task of watching over the children was assigned to widows; the others had to spin, wash, etc. And thus also among the men; each had his assigned duty. If a man or woman became ill, they had special nurses. They all had definite hours for eating and sleeping, but not a minute for playing or idleness. Only the young people for the sake of their health walked an hour under the supervision of the teachers. There was no anger, no revenge or envy, no jealousy and no enmity among them, also no concern about temporal possessions. In short, there was a lovely harmony which seemed  to have no other object than to better the human race and to promote the Kingdom of God. Such a life," Grimmelshausen concludes, "I would have liked to introduce, for it appears to me these people by far surpass in their way the lives of the monks." And then he goes on musing, "I often said if I could only convert these Anabaptists, so that our coreligionists could learn their way of life from them, . . . what a blessed man I should be. Or if I could only persuade my Christian brethren to live lives as Christian (according to appearance) as these Anabaptists." He would have been willing to sacrifice his entire fortune and possession if he thus could establish a Christian community after that pattern, but alas, where would he find such people able or willing to go along such lines?

The question as to how Grimmelshausen got all this information and also his enthusiasm for this way of life has not been completely solved. Some literary historians think it possible that he visited Slovakian Bruderhofs between 1640 and 1645 (the time of the great Vorsteher Andreas Ehrenpreis), but others doubt that he ever traveled. A. J. F. Zieglschmid thinks rather of contacts with the newly established Hutterite Bruderhof in Mannheim (which existed between 1645 and 1684) where Grimmelshausen might have learned all the details described, and also the story of the Hungarian mother colonies. In any case to him it