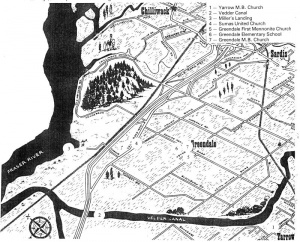 Some of the area that is now Greendale was part of Sumas Lake into which the Chilliwack and Vedder rivers flowed. The Vedder Canal was constructed in the 1920s to provide a channel for water from the Vedder River to the Fraser River and in this way Sumas Lake was drained. The land is generally flat and is excellent for dairy and fruit farming of various kinds. In the spring of 1948 most of Greendale was flooded after a dyke on the Fraser River broke and water covered a large part of the Greendale area. 400 to 500 people were affected by the flooding, with many losing everything they owned. It took some time for the people to recover from this economic setback but Greendale continues to thrive in its beautiful rural setting.

During the latter part of the 1800s settlers with names such as Chadsey, Hall, MacGillivray, Toop, Zink and others moved into this area to begin farming. Originally the small settlement that developed was known as Sumas (to avoid confusion with a nearby town in Washington State the name was changed to Greendale around 1950). 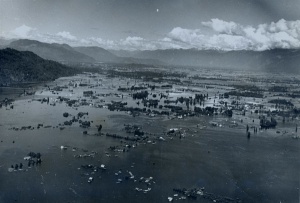 The Sardis Mennonite Brethren (MB) Church was organized at the beginning of 1931 with 24 members. Henry G. Dueck was chosen as leader with Jacob B. Harder as assistant leader. Later in the same year a church was constructed on property donated by the Duecks at the corner of Sumas Prairie and South Sumas Roads. The name of the church was changed to Greendale MB Church in 1952. Their largest membership stood at 360 persons in 1951 but had decreased to257 in 2011. The Greendale Bible School was operated by this church from 1938 to1946.