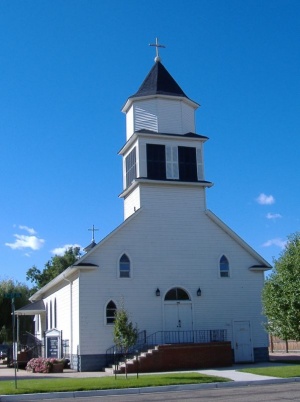 The Mennonite Church of Greeley (Colorado) held its first official meeting on Sunday morning, 12 July 1964, in the home of Howard and Marge Yost. An organizational meeting was held that afternoon at the Greeley Community Building with nine charter members. The congregation’s purpose was to provide for fellowship and witness outreach in the north central Colorado city – an agricultural center, seat of Weld County, and the home of the University of Northern Colorado. Glenn B. Martin, chaplain of Colorado General Hospital in Denver, served as pastor of the new congregation for one year. On 20 June 1965, the first resident pastor, Wesley Jantz, was installed and served in that capacity until 1973. The congregation began meeting in a Seventh Day Adventist Church, but in 1968 the Rocky Mountain Mennonite Conference provided the church with funds to purchase four building lots in the city’s Highland Hills section. In 1971 the congregation bought a former Evangelical United Brethren church building and parsonage at the intersection of 12th Avenue and 12th Street and thereafter disposed of the previously purchased lots.

Under the pastoral leadership of Curt Kuhns, who became pastor on 15 March 2010, the congregation, which then had 57 covenanted members, worked at determining its mission in Greeley. A Spanish language congregation used the church facility three nights per week.

Unrau, Harlan. D.  In Pursuit of Land, Health and Mission:  A History of Mennonites in the Mountain States Region.  Printed in Canada by Blitzprint Inc.  2007.