From GAMEO
Revision as of 03:32, 21 July 2017 by RichardThiessen (talk | contribs) (Added information related to leaving MC Canada and MC Manitoba.)
(diff) ← Older revision | Latest revision (diff) | Newer revision → (diff)
Jump to navigation Jump to search
A checked version of this page, approved on 21 July 2017, was based on this revision. 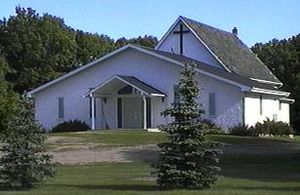 The Graysville Mennonite Church in Manitoba, Canada began in 1925 when Abe Dahl, who together with 12 other families that had settled in the area, organized the first formal worship services in the Orr United Church building. The Mennonites met in the morning and the United Church in the afternoon. They joined the Schoenwieser Mennonite Church group in 1927. During the 1930s some families moved away and other families moved to the area, changing the composition of the group to consist of Schoenwieser, Rudnerweider, Sommerfelder, Mennonite Brethren and Bergthaler. In 1947 the Bergthaler ministerial included Graysville on its preaching schedule. In 1945 the Schoenwieser Mennonite Church group elected Franz H. Letkemann as a lay minister to serve in Graysville. In 1953 John H. Janzen, an ordained Bergthler minister from Morden, moved to the Graysville area. The Graysville Mennonite group in 1953 decided to join the Bergthaler Mennonite church group and purchase the Orr United Church building with their help. Franz H. Letkemann transferred to the Bergthaler Church in 1953 and served Graysville until his retirement and move to Winkler in 1960.

The church building which was purchased in 1953 was moved and placed on a full basement. In 1960 the redirection of the highway necessitated another move. The church was moved renovated and supplied with better Sunday School facilities. Another subsequent building project occurred in 1988.

Frank Letkeman, son of Franz H. Letkemann, was ordained as deacon in 1955 and as minister in 1965.

The language of worship was originally German; the transition to English happened in the 1960s.

The 50th anniversary of the congregation was celebrated on 11-12 October 2003, marking 50 years from their formal organization in 1953.

Conference of Mennonites in Canada / Mennonite Church Canada (until 2017)