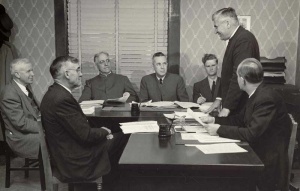 Christian L. "C. L." Graber was born on 20 December 1895 near Wayland, Iowa to Daniel and Fanny Conrad Graber. He was baptized in 1909 and became a member of the Sugar Creek Mennonite Church. While a student at Hesston College (Kansas), he volunteered for relief service in the Middle East (1919-1920). On his return in 1920 he married Mina Amanda Roth (13 October 1895-7 November 1968) and was ordained to serve as associate pastor of his home congregation while farming to earn a living. They became the parents of six children. Following Mina Graber's death he and Phebe Ann King Erb (25 July 1900-23 June 1987) were married in 1969. C. L. died 12 November 1987 in Goshen, Indiana and was buried at the Prairie St. cemetery in Elkhart, Indiana.

In 1924, C. L. was called to serve as business manager of Goshen College, Goshen, Indiana, in which position he continued until 1949. During this time he also served as pastor of the Goshen College Mennonite Church from 1931 to 1942. Nevertheless he still found time to pursue a variety of business ventures. These included the reopening of the Wayland (Iowa) State Bank after the crash of 1929, the founding of Goshen Electric, Inc., a partnership in E. Z. Gas, Inc., and other successful ventures.

This business ability was also made available to the church at large. In 1945 he established the Mennonite Mutual Aid office in Goshen and served as its first executive officer until 1954. Mennonite Central Committee (MCC) frequently called upon him for help: as the first director of overseas relief after World War II, establishing the Pax reconstruction units in Europe, assessing the possibiliites of relief and development work in Puerto Rico, Morocco, the Philippines, and China. From 1954 to 1955 he served as MCC director for lower South America. He was the first director of Mennonite Disaster Service (MDS). He also served on numerous local church and civic boards, always known as a man of sound judgment and reliable character.

Warkentin, A. and Melvin Gingerich, compilers. Who's Who Among the Mennonites. North Newton, KS: Bethel College, 1943: 89-90.