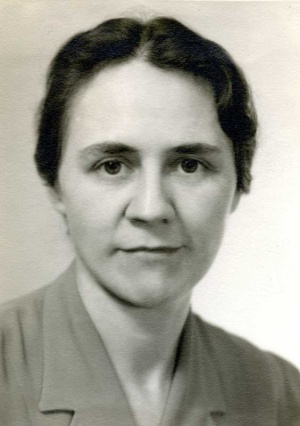 Viola M. Good: Dean of Women and Advisor to Students from Abroad at Goshen College; born 13 June 1907 to Henry Good (17 October 1877–14 May 1955) and Mary Martin Good (13 November 1883–6 May 1970). The eldest child, Viola was born on her maternal grandfather's farm north of Elmira. She had four sisters and three brothers. She died on 24 September 1993 and is buried in the Erb Street Mennonite cemetery in Waterloo.

When Viola was a toddler, she and her parents moved north of the "town" of Waterloo where they bought a few acres of land for a market garden farm. There they built a house, a barn, raised poultry and grew produce to sell at the local market and raised their eight children. The family market business had all the children picking berries, churning butter and preparing produce and chickens for sale. Viola also helped her father with early morning milk deliveries in Waterloo. "We were quite a self-sufficient family," said sister Vera Good.

School ended for Viola with eighth grade. She began working outside her home, first as a maid and then as a seamstress at Forsythe's shirt factory. Intellectually ambitious, she turned to correspondence courses from Goshen College. At age 22 Viola began three years of study at Toronto Bible College, paying for room and board by working for the family with whom she lived. In her final year she was elected "assistant head girl." Due to the economic Depression, she returned to her factory job, but her dream of Christian service persisted. She taught Sunday school and served on committees at Erb St. Mennonite Church in Waterloo where she was baptized as a teenager.

In 1936, S. C. Yoder, president of Goshen College, invited Viola to the college, offering her a job as matron of Kulp Hall, a women's residence, to defray expenses. She successfully passed GED (General Education Development) tests and entered college as a freshman at age 29. After completing a B.A. at Goshen, she earned an M.A. at North Western University in Evanston, Illinois and later did post-graduate work in personnel at Columbia University in New York City.

Viola returned to Goshen College as Dean of Women and Adviser to Students from Abroad, retaining the latter position for five years after her retirement at age 65. Her home, an apartment in the girls' dorm from 1936 to 1958 and then a duplex near the college until 1992, was a home-away-from- home for many international students. During a sabbatical year in Japan and Korea, Viola contacted former students and taught English at the International Christian University in Japan.

With her health becoming a concern at age 85, Viola made the difficult decision to sell her house, leave Goshen which had been home for nearly 56 years, and move back to Ontario to live with her sister, Vera, in Simcoe. Here she joined the Women's Institute, attended the local Baptist church and Bible study sessions. She died quietly at home, 15 months after her move.

Her family was of great importance to Viola and she was a bonding force within it. Her other great satisfaction was her work with international students. When she retired, Viola established "Scholarships for Students from Abroad" at Goshen College.