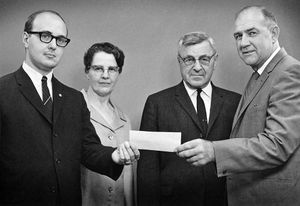 Margaret Culp: leader among Mennonite women in Ontario, Canada and organizational trailblazer was born 11 February 1912 on a fruit farm in Vineland, Ontario, the eldest of one son and three daughters of Alvin Culp (3 September 1885-29 January 1982) and Alma (Werner) Culp (16 January 1887-31 May 1962). Margaret was baptized and joined The First Mennonite Church in Vineland on 2 October 1921. On 22 August 1936, Margaret married Elmer Grant Brubacher (23 November 1911-31 July 1986), son of Jacob (1881-1963) and Elmina (Hunsberger) Brubacher (1885-1953). Margaret and Elmer's three sons, David, Robert and Ray and one daughter Anne produced 12 grandchildren, 32 great-grandchildren and five great-great-grandchildren by the time of her death. On 2 June 2002 Margaret married Milton Roy “M. R.” Good (20 June 1911-3 March 2008) in Waterloo, Ontario. Two stepsons and one more grandchild joined the family. Margaret died at age 103 15 August 2015 at Grand River Hospital in Kitchener, Ontario. A funeral service was held on 21 August at Erb St. Mennonite Church, where Margaret was a longtime, active member, followed by burial in the Erb St. Mennonite cemetery.

For many Mennonite young people of her era, formal education ended with grade eight, but Margaret went on to Beamsville High School and then to Hamilton Normal School (teachers college), graduating in 1933. She also attended and later taught at Ontario Mennonite Bible School in Kitchener. Margaret taught for one year in the one-room Nine Pines Public School and two at Baden Public School before her marriage. At that time, married women were banned from teaching but in 1959 Margaret returned to teaching at the Mannheim and Williamsburg public schools. She continued part-time teaching after the Brubachers sold the farm in 1964. Their move to Kitchener caused “tremendous culture shock,” according to daughter Anne, but it opened new volunteer opportunities for Margaret.

Already a leader among women at Erb St. church, Margaret taught Sunday school and is credited with launching an evening sewing circle for women not able to attend daytime meetings. Named the Beacon Circle in 1948, it soon organized an executive independent of the senior circle. Margaret also served on the church council in the late 1960s and 1970s. Beyond her congregation, Margaret was named vice-president (1951–1954) then president (1954–1957) of the Ontario Women's Missionary and Service Auxiliary (later Commission). She was at the forefront when WMSA drew up its constitution. Her enthusiastic and creative leadership helped expand the Cutting Room in downtown Kitchener, managed by WMSA women but under the all-male Non-Resistant Relief Organization (NRRO). On 5 April 1951, Margaret led in a decision to expand the Cutting Room, advertising and marketing its services at workshops and in church periodicals. This initiative led to rapid growth and within a few years to independence from the NRRO.

Margaret's most satisfying volunteer work was with the New Hamburg Mennonite Relief Sale (NHMRS) where she was a charter member of the board. The first sale was held 1 May 1967. Handmade quilts were the major attraction and raised the most money. The board saw the need for a “Women's Work Committee” and invited Margaret to chair it. Feisty as always, she insisted on serving as a full member on the all-male board. “If I help earn the money, I'll help see how it's used,” she declared and won a seat at the board table! Later, Margaret also served on the Mennonite Central Committee Ontario board from 1984-1986.

The dedicated leadership of Margaret was a key to the success of the NHMRS. She involved Mennonite Conference of Ontario, Mennonite Brethren and Stirling Ave. Mennonite Church women from nine congregations in leadership roles. Margaret promoted an idea she got from Mrs. Eldon Roth who, in leaving the first organizational meeting before the others, said her group would pay for and bring everything needed for their project including their own equipment. Margaret asked each church and participating group to do the same. This has been the model since 1967, making the Ontario Relief Sale, the largest in Canada, a success.

Five years after Elmer died, Margaret moved to an apartment at Fairview Mennonite Home in Cambridge where she immediately “became immersed in daily activities, volunteering for everything” said daughter Anne. Following her marriage, at age 90, to Milton Good and an Alaskan honeymoon cruise, she moved to Milton's apartment in Waterloo where she lived until shortly before her death.

Margaret was indeed a “force to be reckoned with,” a remarkable woman, who ventured into places Mennonite women had not been, blazing a trail for younger women to follow. John Brubacher, a grandson, in his eulogy, cited the solid foundation of her faith. Margaret built a life of dedicated and innovative service on that faith.