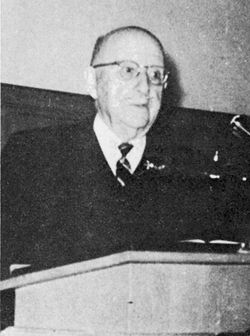 Jacob and Rosina Good, who had lived earlier in the Roseville, Ontario area, returned to Ontario with their family in 1870 six months after Cyrus's birth. Jacob was a blacksmith, and worked in a variety of villages around Waterloo County. According to the 1871 census the family was affiliated with the Evangelical Association. Cyrus had the usual elementary school education. He was always a short man, being five feet, four inches in height. Cyrus had a conversion experience at the age of 18 and became a member of the Bethany Mennonite Brethren in Christ Church in Berlin, Ontario, where the family began to attend in 1879 after moving to town. He worked for a time in the grocery business, but felt a call to ministry. C. N. (as he was always known as a minister) began to preach locally in 1893, and received a "Probationer's" license in 1894 that saw him serve as a helper (assistant pastor) in the Bethany and Breslau congregations. In 1896 he was appointed to serve the Port Elgin congregation, and was also ordained as a minister. Over the years he also pastored the Conestoga, Elmwood, Aylmer, Toronto West, and Markham congregations. He held the first meetings in Hanover in 1901 that led to the formation of the Hanover congregation several years later. During his years in Markham, C. N. revived a congregation badly divided by the Pentecostal movement of the day. Good retired from active congregational ministry in 1943.

C. N. Good also served the Ontario Mennonite Brethren in Christ conference in many capacities. In 1913 he became President of the City Mission Committee, serving for six years at that time. Overall he served 20 years as the leader of the city mission work. He was a Presiding Elder for seven years, and chaired the annual conference four years. He also served as secretary-treasurer of the Ontario Conference for 13 years. He was a part-time or full-time evangelist for 18 years. He attended the Ontario district conference annual meetings 64 consecutive years (1895-1957). During his 50 years of active service he attended 2,829 Sunday school sessions, 3,469 prayer meetings, preached 9,434 sermons and made 22,084 pastoral visits. His average annual salary was $773.35. He was a popular preacher, and served widely in the Mennonite Brethren in Christ denomination as an evangelist. C. N. and Livy Good are buried at the Woodland Cemetery in Kitchener.

"Rev. C. N. Good: fifty years in the ministry." Conference Journal of the Ontario Conference of the Mennonite Brethren in Christ (1943).