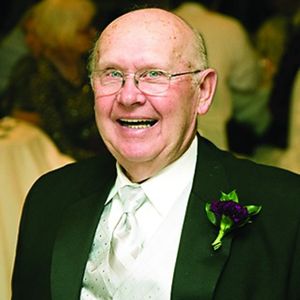 Henry Goerzen: musician, conductor and music educator; born 14 December 1931 in Coaldale, Alberta, Canada to Aaron Goerzen (1905-1932) and Sarah (Penner) Goerzen (later Reimer) (1908-1995). He was the 2nd and last child of his father, and the 2nd of four children of his mother. His step-father was Gerhard P. Reimer (1893-1989). He had an older sister, five step-sisters -- four older and one younger, and two younger half-brothers. He was married to Dora Willms, daughter of Heinrich Willms and Anna (Fisch) Willms in 1956. Henry and Dora were divorced in 1977. They had three children. Henry Goerzen died 22 November 2012 in St. Catharines, Ontario, Canada.

Henry's father died when he was two months old, and so he was raised by his widowed mother until age 11 in the Lethbridge, Alberta area. In January 1943, his mother married widower Gerhard Reimer who had 5 daughters. Later that year, the family moved to a fruit farm in Niagara-on-the-Lake, Ontario. Henry was baptized by Johann Penner of the Virgil Mennonite Brethren Church on 4 August 1946. Most of his life was lived in the Niagara region.

Goerzen began teaching music part-time at the Mennonite Brethren Bible Institute of Ontario in Kitchener during his university days. Upon graduation he taught music courses, conducted school choirs, bands and orchestras in St. Catharines schools and became the music consultant for the Lincoln County Board of Education toward the end of his teaching career. Henry Goerzen directed the Virgil Mennonite Brethren Church Choir, 1955-1957, 1959-1970, the Bethany Mennonite Church choir, 1970-1973, and the Calvary Church (St. Catharines, Ontario) choir, 1973-1975. From 1964-1967 he led a band of 30 to 40 brass and woodwind players that rehearsed regularly in the Virgil MB Church and played in various churches and at open-air meetings. He was the conductor of the Canadian Youth Choir in St. Catharines from 1973-1984, a group of 50 to 60 high school age singers that traveled extensively to places like the Canadian Maritimes, Trinidad, Germany and Yugoslavia. He founded the Chapel Singers, an adult multi-denominational choir that performed an average of 12 concerts a year. Henry was involved with the radio ministry in the Virgil MB Church in the early 1950s, singing in the male quartet for a radio program that aired weekly on CHVC in Niagara Falls. Years later, in 1981 he again was involved in radio, hosting a musical program, entitled "Musical Treasure Chest." Henry selected choral and symphonic works from the station's library to provide good listening to those who preferred classical and sacred music. The program was first featured on CJQR-FM and then CKTB-AM in St. Catharines.

During his final years, Henry Goerzen continued to touch people's lives as he served as the pastoral care coordinator based at Niagara Ina Grafton Gage Village and the Linhaven Home in St. Catharines. He brought a "sunny presence" as a tennis player at The Club at White Oaks in Niagara-on-the-Lake. In 2011 these tennis club friends forwarded his name to the St. Catharines Standard as their nominee for the "12 Days of Giving" series, which featured persons "who has gone above and beyond to do selfless things for others." He was featured in the 2nd installment of this series.

In addition to his 35-year career in St. Catharines schools and the numerous community groups that he conducted, he will be remembered for how he inspired people to love singing and music, and use it to praise the Creator.

Friesen, C. Alfred. Memoirs of the Virgil-Niagara Mennonites: History of the Mennonite Settlement in Niagara-on-the-Lake, Ontario 1934-84, written and compiled by C. Alfred Friesen for the occasion of the fiftieth anniversary jubilee celebration, Oct. 13, 1984. (1984): 125.