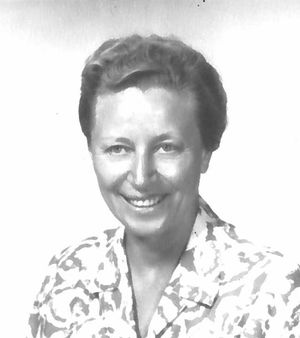 Anna Rose Goertzen: missionary to Africa; born on 15 September 1911 to Isaac E. Goertzen (28 March 1881 - 4 November 1955) and Tina (Regehr) Goertzen (20 September 1881 - 25 January 1929) in Kremlin, Oklahoma, USA. She was the third surviving child of eight in the family. Anna was converted at the age of 11 and was later baptized and received as a member of the Mennonite Brethren church in Henderson, Nebraska, USA. From 1938 to 1979, Anna worked with missions in the Belgian Congo (Zaire). In 1979, she returned to the United States, where she settled in Burlington, Colorado. Later, she moved to Henderson, where she died on 11 July 1994 at the age of 83.

In her early years, Anna lived with her family on farms in Oklahoma and then in Henderson, Nebraska. Anna was converted to Christianity at the age of 11 and was baptized and accepted as a member of the Henderson Mennonite Brethren Church in Henderson on 20 August 1922. She completed her secondary studies at the Madrid High School in 1929 and then went to study education at York and Kearney College in Kearney, Nebraska. Following her graduation in 1934, she studied at the Northwestern Bible and Missionary Training School and then at the Vocational and Franklin Hospitals in Minneapolis, Minnesota, USA. In 1936, she received her nurses’ aide certificate. Meanwhile, she was active in her church, teaching Sunday School, singing in the choir, and helping in evangelistic work. She taught in a public school in Madrid, Nebraska, and spent some time working at two local missions in Minneapolis.

For some time, Anna had felt a call to work in overseas missions. On 10 October 1937, she was ordained at the Paxton Mennonite Brethren Church in Nebraska by H. D. Wiebe and H. C. Flaming. She left for the Belgian Congo in July 1938 and went to Kafumba, where she taught in the school and also did medical work. Following her first term in the Belgian Congo, Anna continued her studies in the United States, graduating in 1947 with a Bachelor of Arts from Tabor College in Hillsboro, Kansas. She then went to study tropical medicine in Antwerp, Belgium and went to work in the medical and teaching fields at the Kipungu and Matende stations in the Belgian Congo.

Goertzen stayed for over 40 years in Africa, with several breaks for further studies in the United States. In 1961, she received a Masters of Arts in education before going on to study at the Mennonite Brethren Biblical Seminary in Fresno, California. Education was her specialty, and in 1957, she became the director of educational work in Lusemvu and the surrounding areas. For her first term, she and a friend had gone as independent missionaries, but after 1947, she became part of the American Board of Foreign Missions group. During the country's unrest in the early 1960s, she went to live in the capital city of Kinshasa. On her return, she continued with her work in medicine and education.

In 1976, Anna began teaching at a new Bible school in Kikwit, where she also helped to translate some of the materials from English into the local language of Kituba. She retired in June 1979 and settled in Burlington, Colorado, USA. Later, she moved to Henderson, Nebraska and joined the Mennonite Brethren church there. She died in Henderson at the age of 83 on 11 July 1994.

Anna Rose Goertzen was a dedicated mission worker who spent her career helping the people of Africa. Her commitment to her calling was an example for others to follow.