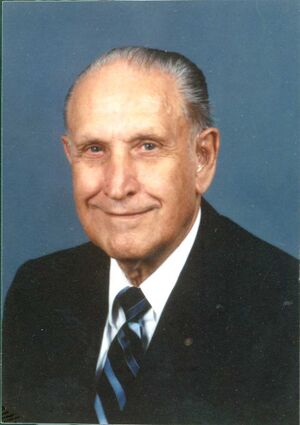 Goering graduated from Moundridge High School in 1941 and attended Bethel College 1941-43 before being drafted. After three years in Civilian Public Service (CPS) at Hill City, South Dakota; Mulberry, Florida; and La Plata, Puerto Rico, he returned to Bethel College and graduated in 1949. He then entered two years of Mennonite Central Committee voluntary service in Paraguay. Following his service, Goering continued his education at Indiana University, Bloomington, receiving an MS in Recreation in 1953. From 1954 to 1958, he taught recreation and physical education at Bethel College while also serving as Dean of Men.

Oswald Goering completed his dissertation entitled "The duties of selected Protestant church recreation directors in Indiana" at Indiana University and received his PhD in 1956. After leaving Bethel, he explored various employment options and decided to continue his teaching career at the Lorado Taft Field Campus of Northern Illinois University, teaching outdoor recreation. He remained there for 21 years. He became widely published and in demand as a speaker in this field. He served as a consultant to various groups regarding their camping programs or particular camps, especially Christian/Mennonite groups.

Goering was involved in numerous other activities, most notably in Rotary International and Heifer International, where he assumed leadership roles and wrote and directed multiple grants and projects. He served and traveled widely, including summer work camps in Mexico in 1957-58; studying in Germany in 1963-64 while on sabbatical; summer consultant to youth service projects in Italy, Yugoslavia, and Austria in 1964; consultant to Mennonite Voluntary Service in 1969; study tours of Europe in 1970; leader of study tours of Swiss Volhynian homelands in 1995 and 1997; and many more. He received awards from Northern Illinois, Rotary International, Heifer International, and Bethel College for his service.

Elaine Luella Wedel Goering was born on 26 Sep 1926 in Harvey County, Kansas. Her parents were Edward B. Wedel (20 February 1890-3 July 1952) and Katherine Wedel (9 November 1894-April 1967). The family moved to Holdenville, Oklahoma, where she spent most of her childhood. She met Ozzie a few weeks before the end of the school year in 1943. Shortly after that Goering began his three years of CPS service. During this time, they carried on perhaps the most extensive correspondence of any CPS “couple” with two to three letters almost every week for the entire three years. Elaine had returned to Newton and attended Bethel College. Elaine Wedel Goering died 29 September 2014. Oswald and Elaine Goering are buried in the Eden Mennonite Church Cemetery.