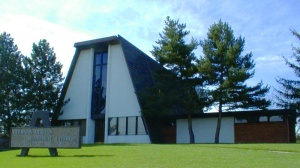 In October 1962 Glennon Heights Mennonite Church was established in Lakewood, Colorado, as a planned outgrowth of the First Mennonite Church of Denver under the guidance of E. M. Yost, Rocky Mountain Mennonite Conference overseer. The First Mennonite Church had grown rapidly during the 1950s, and its facilities had become overcrowded. By the late 1950s many members (particularly younger families) of the church were living in the developing west suburban Denver area. At a business meeting of the First Mennonite Church on 17 May 1961, Yost, who had served as First Mennonite's pastor from 1945-1955, challenged the congregation to establish a new church in that area. In October of that year 22 persons interested in forming a new church met and elected a site committee to find available land in an "unchurched" area on which a new church building could be constructed. On 8 March 1962 the group approved the purchase of 2.5 acres of land at West Virginia Avenue and South Simms Street in west Denver (in 1969 this area would be incorporated as the City of Lakewood), and a steering committee was elected to work with Yost in drawing up a potential membership list and budget. On 22 May, 62 charter members of the new congregation met and determined to start the church's first fiscal year on 1 August and to begin meeting separately from First Mennonite on the first Sunday of October. On 30 September, the First Mennonite Church approved a resolution transferring the memberships of the 62 persons to the newly-formed congregation, and on Sunday afternoon, 7 October, the new congregation's first corporate worship service (with 75 in attendance) was held in the Lakewood Grange Hall with Yost as speaker.

At a business meeting on 21 October the congregation chose the name Glennon Heights Mennonite Church, after the subdivision in which it was located. The Glennon Heights congregation rented the Lakewood and Wheatridge Grange Halls from 1962-1964 for worship services. Two Sunday worship services were begun on 1 November 1964: one at the Wheatridge Grange Hall and the other at an Evangelical United Brethren Church in the Glennon Heights area. On 7 February 1965 combined Sunday services were commenced at Creighton Junior High School in Lakewood. Yost worked with the new congregation to secure Edward Miller of Gulfport, Mississippi, as pastor, and Miller began his pastorate on 28 April 1963 (installation on 16 June 1963). He served as the congregation's pastor until the summer of 1974.

Construction of a parsonage on the 2.5 acre site was completed in 1965, and the new church building was dedicated on 5 June 1966. During the late 1960s and early 1970s, the church experienced steady growth as a result of community outreach and Vacation Bible Schools, the addition of several families from the aforementioned Evangelical United Brethren Church after it closed, and a large influx of I-W service men during the Vietnam War. By the early 1970s the church had an average Sunday morning attendance of more than 200.

Glennon Heights Mennonite Church pastors have included Ross T. Bender, who took a leave of absence from serving as dean of Associated Mennonite Biblical Seminary and also served as President of the Mennonite World Conference (1984-89). On 14 September 1986, a joint worship service was conducted with an Evangelical Formosan Church in recognition of its use of the church facilities and its children joining Glennon Heights' Sunday School Program. Since the 1990s the congregation has cooperated with other area churches in a ministry to the homeless through the Interfaith Hospitality Network.

In May 1990 the Rocky Mountain Mennonite Conference established a new Youth Commission that was designed to promote more active youth activities in the conference. Mark G. Miller served as its first chair.

In 2010 Glennon Heights Mennonite Church, under the pastoral leadership of Betsy Headrick McCrae, had a membership of 80 and an average attendance of 75. Building renovations during 2009/10 have included installation of an elevator and handicap-accessible restrooms.

Frederick, Emma L. "Historical Sketch of Glennon Heights Mennonite Church, Lakewood, Colorado, With a Focus on How It Has Dealt With Conflict." December 2005.