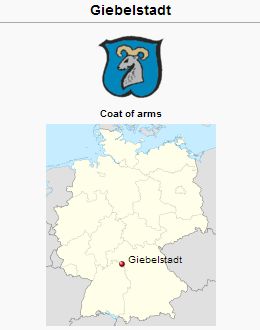 Giebelstadt, a village in Bavaria, Germany, 12 miles (20 km) south of Würzburg (coordinates: 49.65, 9.95 [49° 39′ 0″ N, 9° 57′ 0″ E]), where a Mennonite congregation was established about the middle of the 19th century. The first families settled on leased estates around Zell (Hettstädter Hof in 1803) and Rottenbauer near Würzburg. In Rottenbauer a congregation was organized in 1810, which grew rapidly. After the 1830s religious services were held alternately there and in Giebelstadt, and the congregation was named Rottenbauer-Giebelstadt. The members came originally exclusively from the Sinsheim district of Baden. The most common names were Bachmann, Bahr, Borkholder, Bühler, Fellmann, Heer, Hege, Hodel, Horsch, Hunsinger, Landes, Lichti, Mosemann, Musselmann, Schmutz, and Zeiset. In 1867 a meetinghouse was built in Giebelstadt at a cost of 2,000 guilders, for which Preacher Jakob Horsch and his sons Johannes and Jakob donated the land. It seated 100 persons. A list of 1881 states the number of souls in the congregation as 172. In the following years the congregation declined heavily through emigration to America and southern Bavaria; in 1927 only five or six Mennonite families were living in Giebelstadt out of a total of 122 souls in the congregation. Since most of the members were then living in Würzburg, regular services were begun there in a rented hall. In consequence the congregation became known as the Giebelstadt-Würzburg, congregation. In 1941 the congregation had only 51 souls, with a meeting in Würzburg every Sunday and at Giebelstadt on the first Sunday of the month. In the 1951 Gemeinde-Kalender the name had become Würzburg-Giebelstadt, and the meetings were held in Würzburg on the first and third Sundays of the month and at Giebelstadt on the second Sunday in the home of a Landes family. In 1955 the number of members in the congregation was 61. Almost from the beginning the Giebelstadt congregation regularly had two elders. The list of elders includes the following (with terms of service in the office): Jakob Horsch (?-1888), Johannes Landes (1839-? ), Jakob Fellmann (1876-1905), Jakob Hege (1880-?), J. Hunsinger (1894-1910), G. van der Smissen (1894-1914), M. Fellmann (1907-1936), J. Landes (1907-1918), J. Hege (1914-1929), Johannes Schmutz (1933- ). In addition there were usually two other preachers and one deacon. The noted Ingolstadt elder, Michael Horsch, was earlier a member here and was ordained preacher here in 1909, moving to Hellmannsberg-Ingolstadt in 1913.