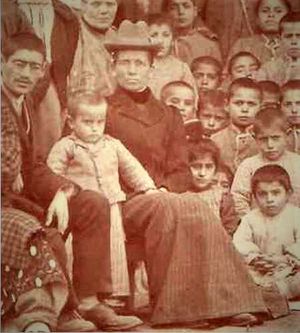 Maria Anna Gerber was born as "Marianna" in Les Vaux, Canton Bern, Switzerland on 30 May 1858 to a Mennonite couple, Christian Gerber (7 August 1818-27 January 1888) and Elizabeth Geiser Gerber (4 June 1827-30 December 1890). She was the seventh child in a family of seven daughters and five sons that lived on a farm called Bellelay. (Her similarly-named younger sister Marie Gerber Petter was a missionary among Native Americans in Oklahoma.) A sickly child, at the age of 12 Maria became ill with rheumatic fever, tuberculosis, and edema. A doctor told her family that Maria would die and her mother gave away her clothes. This near-death experience led Maria to a profound conversion experience following which she felt the call of the Lord to be a witness for Him. Maria Gerber never married. She died 17 January 1917 in Pasadena, California, USA. She is buried in Forest Lawn Memorial Park (Glendale), Glendale, California.

Maria Gerber went to Bern to join a Deaconess Home in 1881 and also took training to become a nurse. On 21 April 1885 she left the home after the head sister felt Maria had an independent and presumptuous spirit that did not fit into the Deaconess Home.

Maria met Rev. and Mrs. J. A. Sprunger in 1889 when they were visiting and evangelizing in Switzerland and became interested in their vision of a deaconess work in the USA. She arrived in New York on 31 July 1891, and attended the New York Missionary Training College of the Christian and Missionary Alliance in that city.

Maria Gerber then journeyed to Berne, Indiana and helped to train the initial group of deaconesses for the new Missionary Society Light and Hope in 1892. Maria also had contact with Dwight Moody and his Bible Institute in Chicago and during the 1893 World’s Fair she was a soloist during his evangelistic campaigns.

In October 1894 she opened the Light and Hope Hospital in Cleveland, Ohio. She was in charge of that hospital when it burned on 1 February 1895. One deaconess nurse and three patients died in that fire. The hospital soon reopened in another location in Cleveland. Part of her job entailed fundraising. In 1895 she went to Waterloo County, Ontario, Canada and visited several Mennonite churches raising funds for the Cleveland orphanage. At a later time, she and Helen Penner went to Europe raising funds for an Armenian mission. Mennonites in Russia helped to support orphans in The United Orphanage and Mission Society.

In May 1896 Maria Gerber was one of the deaconess nurses who helped start what is now Bromenn Hospital in Bloomington, Illinois. She was a dear friend of Sister Rose Lambert and the plight of the persecuted Armenians in Turkey weighed heavily on their hearts. Garabed Der Hagopian, a survivor of the 1894-1896 Armenian massacre, in which his wife died, had pleaded for the cause of the many orphans left from that terrible time. His presentations included the Light and Hope Hospital in Cleveland, Ohio where Maria Gerber and Rose Lambert were both working. In November 1898 they set out for Turkey.

Maria Gerber and Rose Lambert arrived in Turkey at the end of 1898 and began their work in Hadjin, a city of 30,000 in the Taurus Mountains. They rented houses where they could care for 200 orphans and fed hundreds of starving people. Maria also traveled from town to town sharing the gospel. Thanks to the gift of easily learning languages Maria was soon was conversant in the language. In Hadjin she found ways to make jobs for the many widows so they could provide for themselves. Support for the orphanage was given by friends in Europe and the United States, particularly from German Mennonite friends.

After five years in Hadjin, with her health failing, Maria Gerber returned to the United States in 1902 to recover. On her return to Turkey in 1904, Maria ministered in Konya (Iconium) for six months, then moved to near the city of Kayseri (Caesarea) in Cappadocia in a town called Zinjidere. A Greek businessman was sympathetic to Maria’s desire to build an orphanage and gave her two acres. Four stone houses were built in two years so that Zion Orphan’s Home opened in 1908.

In 1914 Maria became very ill and the orphans gathered around her bed in prayer and healing came to her body. After World War I broke out, Maria made a trip to the USA to seek more financial support. The Turkish military took over the Zion orphanage buildings. Maria was back in the USA before the Armenian genocide took took full force. In 1917 she completed a book, Passed experiences, present conditions, hope for the future, on her life, designed to help raise funds for her orphanage.

Maria Gerber died after suffering several strokes in 1917. Her will left all the money she had raised to the Zion Orphans Home. She surely had a busy and productive life lived for her Lord and Savior, Jesus Christ.