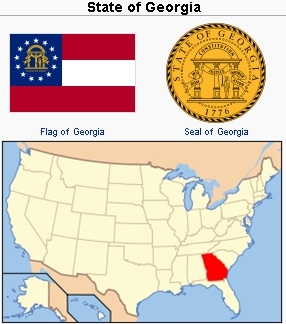 Georgia is located along the Atlantic Ocean in the southern region of the Unites States of America. It is bordered by Florida on the south, by the Atlantic Ocean and South Carolina on the east, by Alabama on the west, and by Tennessee and North Carolina on the north. The area of Georgia is 59,425 square miles (153,909 km²) and the estimated population in 2008 was 9,685,744. In 2005 the state population was 67% White, 30.29% Black, and 3.01% Asian American. At that time people in Georgia were affiliated with the following groups: Baptist: 24%; Methodist: 12%; Presbyterian: 3%; Pentecostal: 3%; Roman Catholic: 12%; Other: 3%; and Non-religious: 13%. The largest denomination is the Southern Baptist Convention.

The first known Mennonite-related presence in Georgia began in 1953 when a half-dozen Beachy Amish Mennonite families, seeking to escape urbanization, moved from Chesapeake, Virginia to Macon County near Montezuma, Georgia. They were followed shortly by a community of Church of God in Christ, Mennonite, people at Louisville in Jefferson County. These two farm communities are generally credited with introducing to Georgia soil-building agricultural practices, which revolutionized an industry dying from repeated cotton-tobacco cropping.

Lancaster Conference started a biracial mission in Atlanta during 1958 using a voluntary service (VS) unit. Although the unit was phased out in the mid-1970s, it had led to the founding of Berea Mennonite Church in 1962 (DeKalb County, 52 members). In 1987 this congregation was affiliated with Southeast Mennonite Conference (Mennonite Church). A Mennonite Central Committee VS unit opened in 1961 in conjunction with a regional racial-reconciliation ministry led by Vincent and Rosemarie Harding. The latter closed in 1967, but Mennonite Central Committee work, refocused to community development, has continued in several locations. Atlanta has had several Mennonite-related intentional communities and fellowships during these years, the earlier ones receiving nurture and vision from Reba Place in Evanston, Illinois. The last such community, Adelphos, began meeting in 1974, but became inactive in the mid-1980s after efforts to obtain more formal leadership failed.

An Eastern Mennonite Board of Missions (MC, Lancaster Mennonite Conference) VS unit at Americus, providing personnel for Habitat for Humanity and community projects, led to amicable contacts with former President and Mrs. Jimmy Carter. Despite once ambitious visions for the state's larger cities, organized church planting, assumed by Southeast Conference in the 1970s halted following two unsuccessful ventures in Albany and on Atlanta's west-side.

Other Mennonite churches in 1987 included Dublin (Laurens County, 1976; Eastern Pennsylvania Mennonite Church, 42 members), Cuthbert (Randolph County, 1979; Conservative Mennonite Conference, 19), and an unaffiliated congregation in Mitchell County near Meigs (1979; 37). In addition to Montezuma, which has grown to some 90 families (220 members), there is a Beachy Amish Mennonite congregation near Cuthbert reporting a membership of 20. Recent articles (1987) in the Sugar Creek Budget indicated that there was also an Amish community near Jessup in Wayne County.