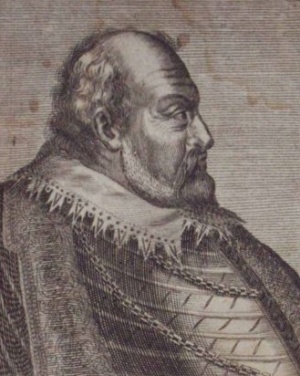 Georg Friedrich was a zealous promoter of Lutheranism and rigorous opponent of Anabaptism. When he took over the reign of the duchy of Prussia from his feebleminded cousin Albrecht Friedrich (1553-1618), the Mennonites there requested permission to settle in Königsberg and other cities and towns. He replied in the decree of 8 January 1579, that it was his duty as a Christian ruler and for him a matter of conscience to see to it that unity of faith prevailed among his subjects, as the constitution of the land already specified. But the confession of faith presented by the Mennonites showed that in many points they did not have the true Christian faith, also in the matter of police and the family they did not agree with the Augsburg Confession or the Prussian corpus doctrinae, and primarily in the holy sacrament of infant baptism their attitude was very offensive. Therefore the prince was unable to grant their request; instead all Anabaptists were to leave the country by the first of May (Mannhardt, Wehrfreiheit, 110). This mandate was renewed and intensified in 1585 and 12 November 1586, making it punishable by death and confiscation of goods for any "who would not adhere to the church books of the country" to remain in the country; but the tradesman was to have free access by water or land to carry on his business (Hartknoch, 497). These mandates were evidently not strictly enforced, for Mennonitism maintained itself in the duchy of Prussia.