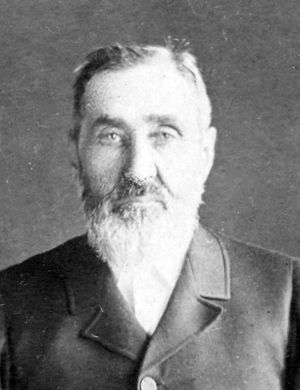 Peter Geiger was a farmer and a preacher of the New Mennonite Church of Canada West and the Canada/ Ontario Conference of the Mennonite Brethren in Christ in Waterloo County, Ontario, Canada. He was born 11 January 1835 on the family farm near Wilmot Centre, Wilmot Township, Waterloo County. Parents were David Geiger (17 March 1796-9 April 1869) and his second wife Mary Steinacker (17 September 1798-17 October 1846). Peter Geiger was David and Mary's 7th child of nine (six sons, three daughters) and he had a primary school education. (Peter's uncle, Ulrich Geiger, served the Mennonite Church in Wilmot about 26 years. Some time around 1850 Ulrich briefly supported Daniel Hoch's New Mennonite movement.)

Peter Geiger was married three times. He married English-born Mary Ann Wilson (born 19 February 1840) on 1 January 1858. Her parents are not yet known. After her death on 25 November 1873, leaving young children, Peter married Anna Byer, widow of John Lemmon Conner and already mother of about ten children, on 6 October 1874 at her residence in Markham, Ontario. Annie was born 28 August 1830 and died on 4 September 1900 in Breslau. Her parents were David Byer (15 June 1791-1 September 1844) and Anna Dohner/Doner (6 May 1798-18 November 1865). Both were from Lebanon County, Pennsylvania, and died in Markham, Ontario. Another daughter of this couple, Elizabeth, was the wife of Abraham Raymer, a founder of the New Mennonites in Markham. After Annie’s death, Peter Geiger married again, in January 1902, to Elizabeth (“Eliza”) R. Shiry (Sheirich) of Breslau, who was born 13 March 1847 in Waterloo Township. Her parents were David Sheirich (24 December 1790-15 December 1862) and Elizabeth Reist (12 February 1803-22 July 1876), both from Lancaster County, Pennsylvania, USA.

With Mary Ann, Peter Geiger had six children: three girls and three boys, though the third boy died in infancy, days before Mary Ann herself died. Peter Geiger died 3 February 1920 in Breslau, Waterloo County and is buried in Breslau Mennonite (Cressman’s) Cemetery, as is his third wife, Eliza, who died 14 March 1926.

According to J. A. Huffman, Peter Geiger was converted at the age of 24, that is, likely in 1859 while farming in Huron County, Ontario (not Michigan, as in Huffman's book). He became a New Mennonite farmer-preacher for their members in Hay Township, ordained in 1863. New Mennonite preachers Samuel Schlichter of New Dundee made several pastoral visits to these members in the 1860s, as did Daniel Hoch.

Peter Geiger lived at the family farm in Wilmot Township; then on his own farm in Hay Township until at least 1871. After Mary Ann's death, the family lived in North Dumfries Township in Waterloo around 1874. By 1881 the family had moved into Berlin in Waterloo County before settling in May 1886 on a farm near Breslau. In semi-retirement due to his poor health, Geiger was counted as a “local preacher” for the Breslau Mennonite Brethren in Christ Church until his death.

Peter Geiger represented the New Mennonites, along with John Steckley of Markham, Samuel Sherk of Michigan, and John McNally from Blair at the uniting conference with the Reforming (Reformed) Mennonites at the Snyder meeting house, Bloomingdale, Waterloo County, 23-25 March 1875. From 1877 to 1879, he shared the ministry with John McNally and helpers Moses Weber and John Rickert for the four congregations or circuits in Waterloo: Bethany in Berlin (Kitchener), Breslau, Blair and Bethel (New Dundee), with Puslinch in Wellington County, a rural meeting point one year. He was assigned as pastor to six meeting places of the Bethel (New Dundee) circuit (1882-84) assisted by William J. Hilts and Wesley Schlichter (a son of Samuel), and at Breslau (1884-85), again assisted by Schlichter.

For some reason, Peter Geiger never wrote for the denominational magazine, the Gospel Banner. Ezra Eby described him as a diligent worker who did well on every station to which he was assigned and Harvey Frey said that his godly example was always noticeable.