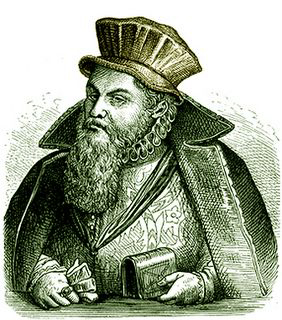 Nikodemus Frischlin (born 22 September 1547, died 29 November 1590) was a classical philologist and Latin poet of Württemberg, Germany. In 1568 he was a professor at the University of Tübingen, and later the court poet of Duke Ludwig. In consequence of quarrels with other professors and the nobility he went to Laibach to become the head of a school in 1582. In 1584 he returned, but left again in two years to evade his enemies. After an eventful life in Prag, Wittenberg, Brunswick, and elsewhere, he was arrested in 1590 because of a challenging open letter he had addressed to the Württemberg government, and died in an attempt to escape from prison.

Among his poetic works his comedies are most important. One of them, presented in 1580 in Tübingen before princes and lords, printed several times between 1592 and 1619, twice in German translation (in 1606 by Johannes Bertesius and in 1613 by Arnold Glaser), is Phasma, Comcedia posthuma, nova et sacra de variis hceresibus et hceresiarchis, in Latin with German additions. An Anabaptist, Melibceus by name, an adherent of Karlstadt and Müntzer, stands in the center of the first and second acts. To his wife he defends in a rude tone of voice communism of possessions and of women, and in an argument with Luther he rejects infant baptism, oath, and government; he has sold his possessions and is going to Moravia. In the two following acts the Catholics are presented, as well as Zwingli, Karlstadt, and Schwenckfeld, while Brenz, the reformer of Württemberg, associates with Luther. In the last act Frischlin, although he occasionally has more liberal religious ideas, has all non-Lutherans, including our Anabaptist, condemned to hell by Christ, who is accompanied by Peter and Paul. Of the choruses between the acts, one is directed against heretics, and another contains requests to the government against the Anabaptists.