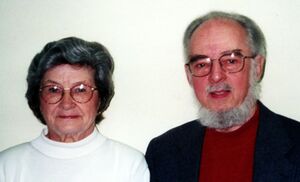 John spent his early years in Starbuck and in Winkler, Manitoba. In 1950 his mother died at the age of 40, leaving his father with six children. It was a difficult time as the youngest son was less than a year old. John's father remarried to Maria (Peters) Klassen, who had four young children of her own. Together they created a closely-knit blended family.

After high school, John worked for Atomic Transfer, helping support the family and also saving for college. He was baptized in the Winkler Bergthaler Church in 1952 by Rev. J. M. Pauls. In 1957, he graduated from Canadian Mennonite Bible College, and the following year he earned his BA from Bethel College in Newton, Kansas. From there, John enrolled in Mennonite Biblical Seminary, Elkhart, Indiana, where he completed his M.Div. in 1961.

In July 1961 John and Marian sailed to Europe to begin a two-year assignment with Mennonite Central Committee (MCC). John served as PAX pastor for MCC volunteers across Western Europe and North Africa. During the winter months he taught at the Bienenberg Bible School in Switzerland.

In 1963 the Friesens moved to Berlin where John studied at the Kirchliche Hochschule, a seminary started by the Confessing Church in the 1930s. During this time they became acquainted with the Berlin Mennonite Church and the harsh realities imposed by a newly constructed Berlin Wall.

In September 1964 John and Marian returned to Winkler, Manitoba, where John served as Youth Pastor at the Bergthaler Mennonite Church. Within two years, John and Marian returned to Berlin at the invitation of the Berlin Mennonite Church to provide pastoral care for the Mennonite communities of divided Berlin (both East and West) and to oversee the Menno-Heim (Mennonite Guesthouse). Since 1952, the Menno-Heim was a "haven of rest" for East Germans, prior to erection of the wall, and because West Berliners fellowshipped at the same centre, this setting provided John with many opportunities for East-West dialogue. In addition, John’s ecumenical connections brought key people to the Menno-Heim, which was complimented by Marian’s exceptional hospitality.

It was difficult if not impossible for West Berliners to visit East Berlin until the early 1970s, so Friesen’s Canadian passport was key to his frequent crossings from West to East and back. The visits that John made with Walter Jantzen (lay preacher and Mennonite Church leader in the German Democratic Republic) to the scattered East German Mennonite communities were crucial during those Cold War years for helping that community feel less forgotten. The Friesens, along with several other families, were instrumental in arranging shipments of MCC medical supplies to North Vietnam at the height of the war, which was a remarkable peace statement in the context of the political tensions at that time. They were aided in shipping these supplies via East Berlin and Poland by an East German Christian physician who, unknown to them, was a Stasi informant who would violate their trust – something that troubled the Friesens for many years. Nevertheless, John Friesen was able to transport Bibles into the German Democratic Republic (GDR) and the Soviet Union and assist a medical couple from the GDR to flee to Canada. As a further testament to their concern for the Vietnamese people, John and Marian Friesen joined six other German families each in adopting a Vietnamese orphan.

John’s fluency in the German language provided him the opportunity for many years of delivering messages of inspiration and encouragement on the radio ministry Frohe Botschaft (Good News) in Manitoba, starting in 1966 and continuing over the years, delivering his last sermon in 2011. John also served several times a year in broadcasting Sunday morning prayers for the people of the GDR over RIAS (Rundfunk im Amerikanischen SeKtor), Berlin, which were designed alternately by 12 different churches and religious communities in Greater Berlin.

Though energized by scholarship and passionate about theology, John Friesen communicated faith, hope, and confidence in God in ways that were accessible and attractive. His love of people and his passion to communicate faith led him in retirement to give dedicated leadership to congregations embracing a wide theological spectrum. Both young and old gravitated to him from the sophisticated, well-educated people of influence, to the salt of the earth people from less privileged backgrounds.

John was deeply committed to Anabaptist perspectives and ministries of the Mennonite Church. He devoted himself to serious study and intense engagement with people who shared his views as well as with those with whom he differed. He approached life with great enthusiasm, was adventurous, devoted to family and friends with intense loyalty, deeply committed to justice, and courageous in ministries that had no road map. His life was an inspiration for many.