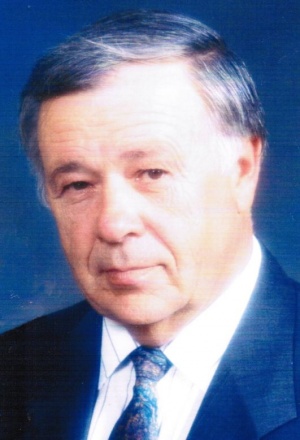 Edward's parents immigrated to Canada from the village of Rückenau, Molotschna, Soviet Union, in 1926. Ed’s father had grown up in Nalgonda, India. He was the son of Abram and Maria Friesen, Mennonite Brethren missionaries who had moved to the country in 1889 (mention is made of this because of the impact this missionary heritage has had on the Friesen family, past and present).

In 1945, Ed’s life was turned upside down when his father died at the age of 50. Ed was only twelve at the time. Shortly after his father’s death, his mother suffered a debilitating stroke. Friesen was, however, a strong willed, independent young man who soon learned to fend for himself. He quit school when he was 14 years old in order to work on the family farm and eventually moved into road construction. After only a few years in the industry, Ed began his own company, Elm River Construction. He soon established a good reputation for obtaining work and completing it to everyone’s satisfaction.

Ed was baptized in the Newton Mennonite Brethren Church at the age of eighteen in 1951. After Ed's marriage to Helen, they settled in Oakville, Manitoba. In 1959, Ed acquired his private pilot’s license and built a runway on his property so that he could fly to and from his various jobs. He often landed after dark on a runway that was lit up with a string of lights sheltered under glass jars. Because of his pilot’s license and this convenient runway, Ed was able to spend more time with his family.

After moving to Abbotsford, British Columbia in 1971, Friesen established two more companies: J. E. Equipment Rentals and W. C. and R. Construction Limited. His work included building roads and highways as well as constructing drainage projects. Ed’s companies did contract work for large ventures such as the Trans Canada Highway, the Winnipeg Floodway, and the Portage Diversion.  Once the Friesen family moved to British Columbia, Ed began to buy, develop, and build his own projects.

Edward’s positive attitude was his greatest asset. He had a great faith in God and was continually thankful for his many "bountiful blessings." He was often heard to say, "I can’t preach or teach, and I can’t be a missionary, but I can help the people who do those things by giving money where it is needed." This was the example he passed on to his children and nine grandchildren.

Throughout his life, Edward Friesen continued to invest in camps and various outreach programs in Abbotsford, Vancouver, his church, and abroad. To this day his investments support a variety of projects and will continue to do so in the years to come. Ed was a long-time member of the Bakerview Mennonite Brethren Church in Abbotsford, British Columbia.