From GAMEO
Revision as of 07:29, 4 January 2017 by RichardThiessen (talk | contribs) (Added categories.)
(diff) ← Older revision | Latest revision (diff) | Newer revision → (diff)
Jump to navigation Jump to search
A checked version of this page, approved on 4 January 2017, was based on this revision. 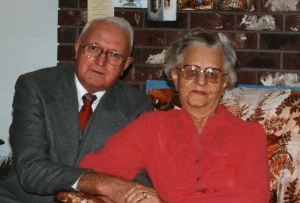 David A. Friesen: businessman and church leader; born 20 December 1913 in Alexanderkrone, Siberia in the Barnaul Mennonite settlement to Abraham and Sara (Lepp) Friesen. In 1926 when David was 12 he was able to leave Russia with his parents and two older brothers and come to Canada where they homesteaded near Glenbush, Saskatchewan. Three of his siblings had died before they left Russia.

David went to school at the German-English Academy in Rosthern but was not able to complete high school due the depression of 1929. In the mid-1930s he attended the Winkler Bible School in Winkler, Manitoba for four years. Here he met his future wife Katharina Voth whom he married in 1937. They had eight children (a ninth died shortly after birth).

David developed tuberculosis in the early 1940s and needed to stay in hospitals and sanitoriums for nearly two years. After he recovered he moved his family to Yarrow, British Columbia (BC) in the mid 1940s. While in Yarrow he became involved in the Mennonite Brethren Conference and church work, including the development of a songbook for the churches. He did much of the translation from numbers (Ziffern) to notes himself and transcribed the notes by hand onto stencils that were then used to print the books. His children remember the countless hours they spent collating the songbooks with him.

Friesen had many innovative ideas about Christian Service and together with others developed several homes for the physically and mentally disabled in order to have a non-institutionalized, place where they could live in a home-like environment. This ultimately was given over to Mennonite Central Committee BC and became the MCC Supportive Care Services (now Communitas Supportive Care Society). He was particularly concerned that the disabled would continue to receive compassionate care after their own parents were no longer able to provide care for them.

He preached on the German radio broadcast over the Chilliwack radio station (CHWK) for 25 years. He was very persistent, not only in evangelism, but also in emphasizing consistent Christian living. He, together with others, developed an English Christian radio broadcast.

Friesen was one of the founders of the Clearbrook Credit Union, not for personal gain, but for the development of a system of mutual support. After retirement he continued to be active with the elderly writing hundreds of wills for them and giving financial advice particularly with regard to estate matters. He was a frequent visitor to many retirement and care homes bringing spiritual encouragement. His life was consumed with service, first to God, but also to his community. He died 3 September 1990 in Clearbrook, BC. He had prepared four weeks of radio broadcast prior to his death and these were broadcast as usual after his death. Fifteen years after his death some of the tapes of his radio broadcasts were still being played in Russia.