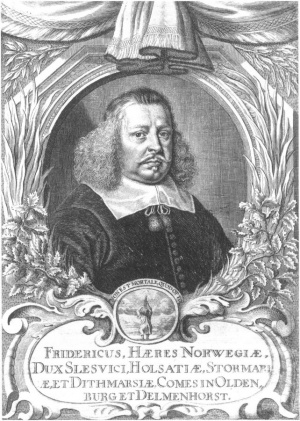 Friedrich continued the moderate toleration his father Johann Adolf had shown the Mennonites. Dutch immigrants founded the city of Friedrichstadt at the conjunction of the Treene and the Eider in 1621; Remonstrants were among the leaders of the undertaking, and it is owing to them that the Mennonites in the city were also granted complete religious liberty. Those living in other towns were permitted to come to Friedrichstadt to worship, but were to avoid private conventicles. He was less tolerant toward the Davidjorists in Eiderstedt. At the request of the Lutheran provost Johannes Moldenit at Tönning he ordered the search of homes for Davidjorist books in 1635. He supported Moldenit in the long-drawn-out trial against the Davidjorists. Though he was not as severe as their accusers wished, he nevertheless demanded that they sign a confession renouncing their heresies; a quantity of Davidjorist books were publicly burned, the defense of their doctrine and possession of Davidjorist books strictly forbidden. But all hostility toward those who had "purified" themselves by confession was also forbidden.