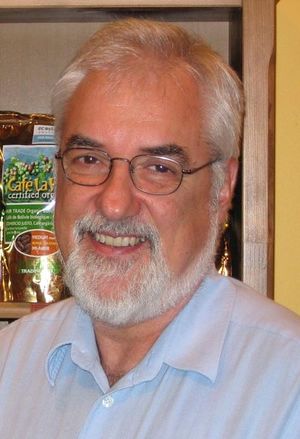 Marv Frey grew up working for his father at his chick hatchery. The family was part of the traditionalist Markham-Waterloo Mennonite Conference attending Martin’s Meetinghouse, near Waterloo. Marv completed grade 10 at Elmira District Secondary School and then began his working career. He became a licensed mechanic. As a teenager he chose to attend Hawkesville Mennonite Church and was baptized there in 1968. He enjoyed fixing up old cars and tempting fate by letting the gas tank run low. He also enjoyed sports and was known for his pitching arm.

With a spirit of adventure, Marv volunteered to serve with MCC and spent a couple years teaching auto mechanics in Jamaica in the early 1970s. After his marriage to Ardith in 1974, they began a term with MCC in Swaziland. Their son Eric was born in 1979 between their MCC terms. By the early 1980s they were back in Africa, this time serving as country representatives for Somalia (1981-84) and Lesotho (1984-87). Their second son, Christopher, was born in 1987.

Marv and Ardith then returned to Ontario, but soon moved to Winnipeg where he served as Refugee Coordinator for MCC Canada and Ardith worked in the Africa program with MCC Binational. They transferred their membership to Aberdeen Evangelical Mennonite Conference Church in Winnipeg. After a few years, Ardith accepted the invitation to take on the position of pastor of that congregation while Marv became Overseas Coordinator (1990-95) at MCC Canada. He went on to serve as executive director of MCC Canada from 1995 to 2000. Under his leadership, MCC Canada worked at modernizing and decentralizing its management structure.

From MCC Canada, Marv Frey moved to the Canadian Foodgrains Bank. Within two years he received a request to serve as executive director of Ten Thousand Villages Canada. Accepting that position, Marv and Ardith moved back to Kitchener, Ontario in 2003. They transferred their membership to Waterloo North Mennonite Church when Ardith became lead pastor there. Marv served at Ten Thousand Villages during an exciting time of expansion, but was forced to resign in 2008 when he was diagnosed with brain cancer.

Marv Frey never had much formal education, but he gained confidence through experience and was highly regarded as a good manager. He was intrigued by puzzles, he was innovative, down-to-earth, and not afraid to get his hands dirty. It seemed he could fix almost anything using his experience and ingenuity. He was a humble man with a quiet confidence.

In his travels for Ten Thousand Villages, Marv met many of the artisans. After his diagnosis he asked an Indonesian worker to make the casket to be used for his cremated ashes. When it was finished he was in a dilemma because it was far too ornate for his personality. He was able to graciously thank those who made it and ask for a simpler version without offending them. His gentle manner meant that he was highly esteemed by those who worked with him.

Frey, Marvin. “‘Then What Does One Do With all That?’: The Life story of Marvin Frey.” Shared at Waterloo North Mennonite Church, 23 July 2008.