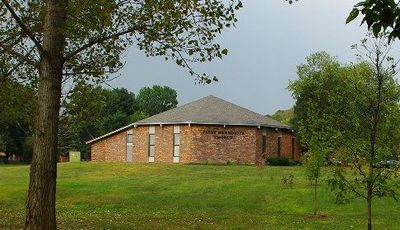 During the Korean War, from 1950 to 1953, Mennonite young men who were conscientious objectors moved to Indianapolis to perform 1-W Service as an alternative to military enlistment. Hospital and nursing programs in Indianapolis drew young Mennonite men and women. The first official meeting of Mennonites in Indianapolis was on 9 August 1952, at the house of Paul Hooley, a medical student. A new meeting place at the Volunteers of America Hall was chosen as the Mennonite fellowship grew. In October 1953, Cleo and Nellie Mann were sent by the Mennonite Mission Board to Indianapolis; Cleo Mann became a 1-W leader and was ordained as a pastor. Construction on a new church building on Kessler Boulevard began in 1956, and the church met at first in the basement of the building.

In 1966 Richard Yoder became pastor of First Mennonite Church, and the church became financially independent from the Mennonite Mission Board. In 1970, an organ was installed and rows of chairs replaced pews. The late 1960s marked the end of the 1-W program in Indianapolis. However, Indianapolis remained a destination for Mennonite medicine, nursing, and social work students, many of whom attended the Church during and after their studies. In the 1970s, First Mennonite Church helped support a Voluntary Service Unit.

In 1983, under the leadership of Bob and Margaret Richer Smith, First Mennonite Church decided to relocate and build an expanded facility. The congregation purchased a 10-acre plot at 4601 Knollton Road in 1984. The church building on Kessler was sold before the new building was completed. The congregation met in the interim period at both Glendale Seventh Day Adventist church and St. Andrew Presbyterian Church. The first worship service at the Knollton Road location was held on 30 March 1986.

Church membership increased significantly in the 1980s, from 95 in 1980 to 149 in 1990. In the early 1980s, the church organized into small groups; these groups met in member homes and were assigned service projects such as supporting Gleaner's Food Bank or rolling bandages for Mennonite Central Committee. The church established a policy that divorced and remarried couples could become members. First Mennonite Church also established a Global Gifts fair-trade store, and financially supported the Indianapolis Peace Center.

Lorene Moore was selected as interim pastor in 1993, and led the congregation until Ryan Ahlgrim was selected in 1995 as a long-term pastor. In 1996, First Mennonite participated in the Interfaith Hospitality Network by hosting homeless families at the church twice a year. The church also collected groceries once a month for the Glick Neighborhood Festival and participated in the School on Wheels literacy program. In 1996, First Mennonite Church, a historically Caucasian congregation, began partnering in Bible Studies and annual worship services with historically African-American Witherspoon Presbyterian Church.

In the 2000s, First Mennonite Church began hiring associate pastors to help share pastoral ministries, with a focus on youth ministry. From 2000 to 2014, all associate pastors have been women. Associate pastor Shannon Walker-Dycus, appointed in 2013, was the first non-white First Mennonite Church pastor. The congregation funded a significant expansion in 2009 and 2010. The church expansion included nine new classrooms, an elevator, extra storage, and a sanctuary expansion. A new playground and garage were built on the church grounds, and members planted wild grasses, flowers, and 150 trees and bushes in order to create an environmentally natural and sustainable ecosystem. Worship in 2014 included a cappella singing, a piano, and an organ. In 2014, First Mennonite Church includes 145 active households, including 235 adults and 130 children and youth.

The Archives of the congregation are located at the Mennonite Church USA Archives in Goshen, Indiana.