As the state capital and largest city in Colorado, Denver’s employment opportunities began attracting Mennonites to the metropolitan area during the late 1930s as the nation emerged from the Great Depression. Some of these Mennonite families joined the Church of the Brethren for hymn singing, worship, and fellowship, first in homes and later in rented space. Additionally, since 1916 the La Junta Mennonite School of Nursing had affiliated with some Denver hospitals, principally Denver General Hospital, and nurse trainees took a portion of their training there. In 1938 the student nurses petitioned the Missouri-Kansas Conference to start a Mennonite church in Denver. Accordingly, the conference authorized its district mission board to begin a church planting ministry in the city to provide a spiritual home for Mennonite nurse trainees and persons with a Mennonite background and also serve as a mission outreach in the growing city. 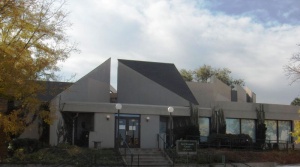 Bishop Allen H. Erb of La Junta played a leading role in starting the Denver mission effort, and the Mennonite Board of Missions and Charities soon appointed Peter Abraham (P. A.) Friesen, a returned missionary from India, to begin the work. The mission’s first services were held 9 July 1941 in a rented Seventh Day Adventist church at 11th Avenue and Kalamath Street. During its first year of operation, average attendance at the mission ranged between 35 and 40. The growing group soon moved to a small building at 1460 Lipan Street. On 3 October 1941, the mission board purchased a building at 1218 Kalamath Street—which came to be known as the Mission Home—to function as a Mennonite center and residence for mission workers. Soon thereafter, two sisters—Martha and Irene Detweiler—arrived from Washington County, Iowa, to serve as mission workers and to help the Friesens with the congregation’s emerging ministry. The congregation was formally organized as a Missouri-Kansas Conference (which became the South Central Conference in 1946) church on 21 December 1941, with 25 charter members. On 27 October 1942, the mission board purchased a building less than a block away from the Mission Home at 1015 West 12th Avenue—known as "the bakery"—to serve as the congregation’s worship and Sunday school center. In 1943, the congregation moved to the bakery, and by 1945 the church had 108 members and an average Sunday school attendance of 138.

In March 1945, Bishop E. M. Yost, pastor of Calvary Mennonite Church in Greensburg, Kansas, exchanged pastorates with P. A. Friesen because the Friesens wanted to move to a smaller city and the Yosts required a more healthful climate to ease Mrs. Yost’s health problems. A Sunday school extension outreach program for youth was established at 131 Lipan Street under the leadership of Don and Thelma Egli, and a bus ministry to pick up neighborhood children in a nearby housing project was initiated. In 1947 George Cutrell was ordained as the congregation’s first and only deacon.

On 17 April 1947 a plot of ten empty lots at the corner of West Ninth Avenue and Delaware Street across from Sunken Gardens Park was purchased with financial help from the mission board at a reduced price from a Presbyterian minister’s widow with vision for an evangelical presence on Denver’s West Side. The first worship service in the new church building's basement was held on 12 December 1948, and on 8 May 1949, the building was dedicated.

During its early years the congregation was variously known as the Mennonite Mission in Denver, Denver Gospel Mission, Mennonite Mission, and Denver Mission. Although the church was generally referred to as the First Mennonite Church by the mid-to-late 1940s, incorporation of the church to support the Detweiler sisters as mission workers required an Affidavit of Incorporation as a non-profit organization. Accordingly, on 30 November 1953, the congregation filed incorporation papers with the Colorado Secretary of State in which it formally adopted the corporate name of First Mennonite Church of Denver.

The Protestant chaplaincy at the present-day University of Colorado Health Sciences Center also has its roots in the work of Glenn B. Martin, chaplain of the La Junta Mennonite Hospital who was invited to Denver by Yost in 1954 to begin the chaplain program at Colorado General Hospital. Yost envisioned locating a Voluntary Service-earning unit at the First Mennonite Church to provide financial underwriting for a program to support Martin as chaplain at Colorado General Hospital and other nearby medical facilities, thus serving as an extension of I-W witness to the Denver community. Thus, a Community Center was constructed at the First Mennonite Church during 1955-56 to house the Voluntary Service unit.

In 1954 E. M. Yost began serving as Overseer of the Colorado District of the South Central Conference. After serving in this capacity as well as pastor of the First Mennonite Church for nearly two years, Yost resigned the pastorate in August 1955, and Marcus "Bud" Bishop, formerly pastor of the Pueblo Mennonite Church, was installed as pastor of First Mennonite in March 1956 to enable Yost to devote full-time to his conference responsibilities. Bishop served as the church’s pastor through December 1967.

In 1959 John and Hope Ventura were appointed by the mission board to administer an active outreach effort in the West Side Hispanic community that had developed around the First Mennonite Church. In October 1961 Ventura was ordained to Christian ministry with the special assignment to work with Spanish-speaking people in the Denver area, and during the next eight years, the Venturas directed an array of community outreach ministries to Denver’s West Side, including direct services to meet human needs, providing church facilities for use as office space by community service agencies, and helping to develop community-based organizations and programs. In December 1962 separate Spanish worship services at First Mennonite, with attendance ranging between 20 and 30, as well as Spanish Bible classes in homes, were initiated under Ventura’s leadership.  Although Ventura was supported by the Mennonite Board of Missions at first, the First Mennonite Church and the Rocky Mountain Mennonite Conference later took over his support. In 1969 the supporting base for the outreach efforts to Denver’s West Side was broadened to include Glennon Heights Mennonite Church, Arvada Mennonite Church (General Conference Mennonite Church), and Garden Park Mennonite Brethren Church, and the program based at First Mennonite, known as Mennonite Urban Ministry (MUM), was expanded into a cooperative approach to urban intercity ministry in the West Side community.

Mennonite Urban Ministry continued to meet the physical and social needs of Denver’s West Side Hispanic community under the leadership of urban ministers/executive directors Don Schierling (1969-1971), Brice Balmer (1972-1979), Tom Friesen (1979-1984), Merv Dick (1984-2001), and Gail Erisman Valeta (2002-2006). The program provided direct services to needy residents; advocated social and justice issues on behalf of the less fortunate through participation on various city and state coalitions; and encouraged development of community organization and empowerment. In 1998, Mennonite Urban Ministry changed its name to Mennonite Urban Ministries and refocused its outreach projects through a decentralized organization that provided financial grants to its cooperating Denver-area Mennonite churches to establish outreach programs in their respective communities. Since that time the First Mennonite Church has administered MUM’s former rent and utility assistance program.

Kermit H. Derstine served as First Mennonite’s pastor during 1968-1975, followed by Wesley Jantz’s interim pastorate during 1975-76. In 1976 Roger and Florence (Flo) Richer, who had previously served as a pastoral and counseling team, were installed as the congregation’s co-pastors, the first husband-wife pastoral team to serve in a Rocky Mountain Mennonite Conference church. On 1 January 1977, Flo Richer received a ministerial license for one year, and she served as part of the pastoral team until 1 December 1978. Thereafter, Roger served as pastor of the church until August 1979.

During 1979-1991 Walter S. Friesen, who had previously been an educator, counselor, and college administrator, served as First Mennonite's pastor. During his tenure Diane McDonald served as Assistant Pastor for four months in late 1980 and three persons served as part-time Associate Pastors: Patricia Shelly (1983-1985); Janice Yordy Sutter (1985-1988); and David A. Stevens (1989-1992). Shelly was the first woman to be ordained in the Rocky Mountain Mennonite Conference, and her co-ordination by the Rocky Mountain Mennonite Conference and the Western District Conference of the General Conference Mennonite Church was the first of its kind. In 1981 First Mennonite collaborated with other Denver-area Mennonite congregations to open an MCC Thrift and Gift Shop in Lakewood, later to be relocated in Denver and become a Ten Thousand Villages store.

During 1990-1991 the congregation undertook a significant building project to provide new and enhanced facilities for sanctuary expansion and office space, a community center, and additional classroom space. The first worship service was held in the new sanctuary on 4 August 1991, final occupancy of the entire reconstructed building occurred late in October, and a dedication service was held in conjunction with a Festival of Faith on 30 November 1991.

Ann Showalter was installed as First Mennonite’s interim pastor on 3 November 1991, thus setting precedent as the Rocky Mountain Mennonite Conference’s first female "solo" pastor. After Jerry Weaver was installed as the congregation's pastor in 1992, Showalter became part-time Associate Pastor, and both would serve in their respective positions until 1996.

In 1995 the congregation acquired a duplex adjacent to the church property at 858-860 Elati Street. Two years later the duplex was converted to a Hospitality House to serve as a retreat and hospitality center managed by Merv and Jane Dick who were also serving as part-time Community Ministers at the First Mennonite Church (1998-2001). The Bethany Worship Group, a small congregation consisting of residents from the surrounding community under the pastoral leadership of Jane, used the Hospitality House and worshiped in First Mennonite Church space on Sundays. In 2003 the Discovering Opportunities for Outreach and Reflection (DOOR) program began using the Elati duplex for office and staff space.

In 2007 First Mennonite’s membership was 295, and its average attendance for 2007-2008 was 216. By 2010 the congregation’s listed membership had grown to 325. The congregation consisted of a significant number of urban professionals and had passions for economic development, art and music, participatory worship, and diversified urban life experiences.

Unrau, Harlan D. In Pursuit of Land, Health and Mission:  A History of Mennonites in the Mountain States Region. Printed in Canada by Blitzprint Inc.  2007.

The First Mennonite Church of Denver is a member of the Mountain States Mennonite Conference (MC USA). The first services of the church were held on 9 July 1941, with P. A. Friesen in charge. The first communion service and the organization of the congregation took place on 22 December 1941, with 25 charter members. On 1 April 1945 the work was taken over by E. M. Yost. On 5 January 1947, the congregation voted to purchase the vacant lots on Ninth and Delaware Street as the site for a new meetinghouse. The membership in 1949 was 100, and by 1955 it was 156 with E. M. Yost as bisohop and pastor. For many years the congregation hosted a large group of I-W men working in the city.