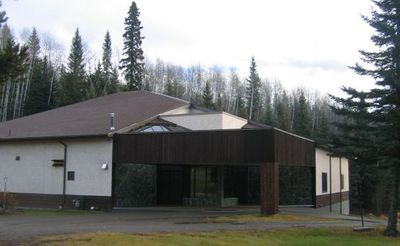 The first Mennonite settlers in the Burns Lake area were Old Colony Mennonites from the Hague–Osler and Toppingham areas of Saskatchewan who moved to the Burns Lake area beginning in 1940. The British Columbia and Saskatchewan governments had arranged for this move in order to allow farmers from drought stricken areas to develop new farm land. Upon arrival they built two churches in Cheslatta and Grassy Plains. The churches were used as private schools during the week, but this important component to "life apart" came to an end when the government insisted that settlers enroll their children in public school.  Of further concern to the elders was the long absences of fathers who worked in the sawmills. Consequently, most of this group moved to Fort St. John in 1958.

In the meantime, Mexican Mennonites moved to the area to work in the mills, as did Sommerfelder Mennonites from the prairies and General Conference (GC) Mennonites from southern BC. In 1952, a group of 15 families met in homes to worship from the Sommerfelder hymn book or the more modern Evangeliumslieder. In the absence of a minister, no one was willing to speak or pray aloud.  When the Conference of Mennonites in BC became aware of this group in 1953, N. N. Friesen was sent to hold meetings. His visit was much appreciated, and he traveled from Jasper to Prince Rupert, finding many brothers and sisters who had gone north to work in the sawmills, but who still spoke German and were from various Mennonite backgrounds. He served communion and also brought much needed used clothing.

In Burns Lake, Friesen held meetings at the home of Isaac Dyck, a General Conference Mennonite from Swift Current. People were happy to come and had a wonderful time of fellowship. He encouraged Agnes Goertzen to start a Sunday School and soon 26 children attended. A year later, Elmer and Ruth Dick came as pastor and public school teacher for this group. As the remaining Sommerfelder and Old Colony groups would not allow other ministers into their gatherings, N. N. Friesen approached the provincial government, requesting that they place Mennonite teachers in the local public schools, and Ruth filled this need, also holding adult evening classes in the little Sunday School house. Altogether, six Mennonite teachers went into the region with the encouragement of the Mennonite Missions Committee, but paid by the British Columbia government.

In 1958, West Abbotsford Mennonite Church started Ootsa Lake Bible Camp south of Burns Lake as a youth service project. Soon, responsibilities were shared with the Burns Lake group. BC Mennonite Youth Organization supported underprivileged children to attend camp at Ootsa Lake and provided Christian literature for them as a follow up.

Willing Workers sewing circle began in 1954 and faithfully supported the work with fund-raising auction sales of their sewing items, Mennonite Central Committee (MCC) films, baby, bridal and "special need" showers. Some volunteered at the local hospital, and others did soap making for the MCC center in Yarrow. They held rummage and bake sales in store fronts and supplied  snacks for the camp.  In 1965, they sent members to the BC Women’s Conference. At first their meetings were in High German with all the visiting in Low German, but a gradual change to English occurred. A program started by Abe Buhler was the training of prospective leaders. The congregation also expanded into Sunday Schools at Topley and Granisle, purchasing a van to transport children. The Topley venture closed in 1975, but Granisle became the Church of the Way.  They also established a group home for adults with mental disabilities.

In 2006 the Burns Lake church had 107 members and continued to reach out with programs such as Alpha, Pioneer Clubs, Youth Church and Operation Blessing.

In 2017 the congregation decided to leave Mennonite Church British Columbia and become an independent Mennonite church.

Churches in Profile. Clearbrook, BC: Conference of Mennonites in British Columbia, 1978: 16-20.

Pauls, Helen Rose. "The Way We Were: First Mennonite Church, Burns Lake." Roots and Branches: Newsletter of the Mennonite Historical Society of BC 14:1 (January 2008): 18-19.