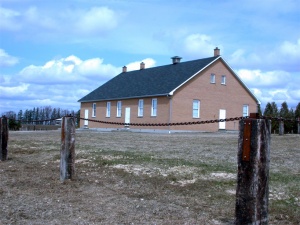 The Farewell Old Order Mennonite meetinghouse is located in Wellington North Township, Wellington County, on the east side of Concession 11, 5 km. west of Highway 6, and midway between Kenilworth and Mount Forest, Ontario.

The first worship serves in Mount Forest were held in homes. The St. John's Anglican Church in Farewell closed in 1968, and was purchased for $300 by Enos Brubacher. The interior was rearranged in an Old Order Mennonite fashion in the winter of 1968/69. The group also removed the steeple. The first service was held there on 18 May 1969. Despite the alterations, the use of this facility remained controversial. The building was used until the (Spring Creek) meetinghouse was built in 1972 on Concession 6 of what was then Arthur Township. At that time 19 families lived in the surrounding community. The former Anglican church was then demolished, and in 1974 a parochial school was built on the property.

In 1978 the church purchased a parcel of land from Urias Weber for the Farewell meetinghouse which was erected in 1979. Minister Elam Weber and Deacon Melvin Sauder then were transferred to serve the new Farewell congregation.

The first burial in the Farewell cemetery took place after the accidental death on 28 December 1979 of Henry M. Martin, a 23 year old man who had been married only a few months.

From 1993 to 1997 the Farewell congregation was split in to East and West districts, as the number of families had reached 60, with a wide distance between the eastern and western boundaries. Another meetinghouse (Westdale) was then built to address this growth.

In 2004 the number of families in the Farewell district was slightly over 40. No accurate count of "members" is available because Old Order Mennonites think of themselves as members of the church at large not just the immediate congregation. When a person moves from one geographical area to another, he automatically "belongs" to the congregation whose meetinghouse is closest to his home. No membership transfer takes place from the former location.