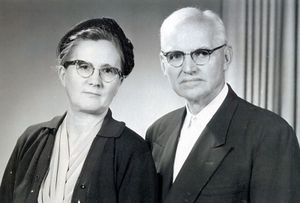 In his early years, Wilhelm lived with his family on a homestead near Schoenthal, Manitoba. His father died when the he was only six years old, and his mother remarried three months later. Wilhelm attended school in the village near his family’s home but had to leave at the age of 14 to help take care of the farm. Later, he also took courses at the Mennonite Collegiate Institute in Gretna to improve his English. His decision to become a Christian came through a teacher at school, and he and his twin brother were both baptized on 27 May 1912 by Bishop Abraham Doerksen in Schoenthal. The family initially attended a Bergthaler church but then started attending a Sommerfelder congregation.

In 1913, Falk married Sara Friesen in the Sommerfelder Mennonite Church. He worked for some time in Altona as a drayman, delivering coal around the region. Soon, however, Wilhelm and Sara moved to a farm in the Roseville area, where Wilhelm worked to support himself and his family while still being active in church leadership. In 1925, he was chosen to be a Vorsänger (song leader) of the church, and he was elected minister in 1927.

That year, Wilhelm and his family began to farm land near Hochstadt that Sara had inherited from her parents. However, she died in childbirth on 24 December 1930, and Elizabeth Schellenberg came to work as a maid for the family. She and Wilhelm were married in June 1932 at the Sommerfelder Mennonite Church.

Over the years, Falk was involved in farming, preaching, and philanthropy. He was interested in mutual aid, and he was a longtime supporter of the Mennonite Collegiate Institute and other schools, as well as being a shareholder in the Co-op and the Credit Union. He traveled extensively in his role as minister of the church, and he was involved in a revival that took place in the church in 1936 and 1937. The revival caused a division in the congregation which resulted in the formation of the Rudnerweide (Evangelical Mennonite Mission Conference) Mennonite Church in 1937.

Falk was one of four ministers chosen to lead this more progressive and spiritually active group, and he was elected bishop on 8 January 1937. The new congregation emphasized concepts such as Bible study, evangelism, and Sunday School. Falk discussed writing a new Confession of Faith for the Rudnerweide group, and he helped to establish similar congregations in Saskatchewan and other areas of the country. In addition, he wrote articles on biblical topics and did extensive pastoral visits among the members of his congregation. He retired in 1962 and moved to Plum Coulee, where he died of a pulmonary embolism on 29 July 1976.

Wilhelm H. Falk was a dedicated minister whose work helped to give spiritual input for many people in southern Manitoba and elsewhere, providing an example for people to follow.