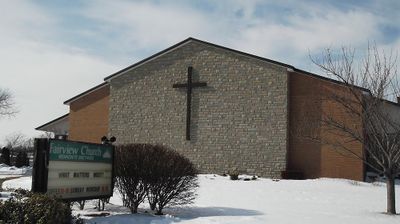 A meeting house was completed in 1964 and a parsonage was completed in 1965. Harvey Gossen became the first pastor in 1964 and he initiated outreach ministries such as Dial-a-Meditation, outdoor services at Fairview Mall in 1966, devotions on CKTB radio station in 1969, Vacation Bible School for boys and girls, and Boys Brigade and Pioneer Girls. With an increase in members and programs, a gymnasium and other facilities were added in 1968. From 1978 to 1987, the congregation also operated a Nursery School. In 1980, they were partners in starting another congregation in the area, Fairview-Louth. In 1981 “Time out” a ladies fellowship was launched which drew in ladies from beyond the regular Sunday attendees. A Sunday school for all ages was offered and reached a record attendance of 500 in 1973. Dozens of young people were baptized over the years with a record of 30 baptized in 1979.

The membership of Fairview MB Church in 1980 was 425. In 2000, the membership stood at 290. In 2016, the recorded membership was 185. And, in 2017, the congregation changed its name to Fairview Community Church. In 2018 the congregation decided to close. A final worship service was held on 30 September 2018 with former pastor Waldo Pauls delivering the message based on Isaiah 66.1-2.

In late spring-early summer 2018, the Mennonite Brethren denomination reached out to Mike and Terrie Sherbino asking them to consider moving to St. Catharines to open a new church. Under their leadership, a new church, that would meet in the same location, called Northend Church, was formed.