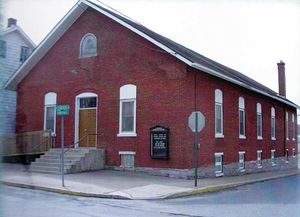 The Fairhaven Mennonite Church in Myerstown, Pennsylvania, USA, was born in a meeting held on 21 May 1973 by a group who desired to form a new Mennonite congregation under the leadership of Homer Bomberger. The families in this group were primarily from the Bernville and Texter Mountain Mennonite churches which had become part of the Eastern Pennsylvania Mennonite Church (EPMC) when it separated from the Lancaster Mennonite Conference in 1968.

Three men were appointed as trustees for the group; their first assignment was to locate a building in which the group could worship. They learned the old, vacant Brethren building in Myerstown was for sale and agreed to purchase it for $19,000. The new congregation was the second to be established in what would later become the Mid-Atlantic Mennonite Fellowship (MAMF).

Eli Burkholder was the first ordained leader to serve at Fairhaven. He had been ordained as deacon on 30 August 1955, at the Texter Mountain Mennonite Church (Lancaster Conference) and was given charge as deacon at Fairhaven on 18 July 1973. Visiting and retired ministers from other churches were used until Fairhaven had a full ministerial team.

Daniel Horning came to Fairhaven from Elm Street, Lebanon (EPMC), as an ordained deacon. He was given charge on 5 October 1974, to assist Deacon Eli Burkholder, and then ordained as Fairhaven's first minister on 8 February 1975. Amos Martin, who had been ordained as minister at the Meckville Mennonite Church (Lancaster Mennonite Conference) and served as minister at the Rehrersburg Mennonite Church (EPMC) from 1968-1976, transferred to Fairhaven. He was given charge as minister on 9 October 1976. Eli Burkholder died suddenly on 10 November 1976. Harry Martin was ordained as deacon on 4 June 1977, to fill the vacancy. He was the first person to be ordained from within the congregation.

The church building was constructed by the Church of the Brethren in 1876. They had remodeled the building several times before constructing a new facility nearby in 1971. The old building was in need of many repairs. Fairhaven made the first improvement to the building on 16 June 1973, when the rose pink walls of the auditorium were painted a mint green. The antique blue wool carpet in the aisles was removed in 1984 and replaced with wall-to-wall tan carpet. Many other improvements were made through the years, including a major overhaul of the basement and kitchen in 1988. The house beside the church had been owned and used by the Brethren as a parsonage. In 1976 they decided to sell the house and gave the Fairhaven congregation the opportunity to buy it privately. On 12 May 1976 the congregation voted to purchase the house. After being rented to various families for more than 30 years, it was dismantled in 2014 to construct an addition to the church intended to provide more classrooms and a more accessible entrance.

Fairhaven has always been a service-oriented congregation with many of its members serving in various ways in the local community and foreign missions. Several members have gone on to be career missionaries. The excellent acoustics in the church sanctuary make it an ideal place for the youth in the Joyful Hearts Chorus to hold practice sessions.